A Space for Art

A Space for Art 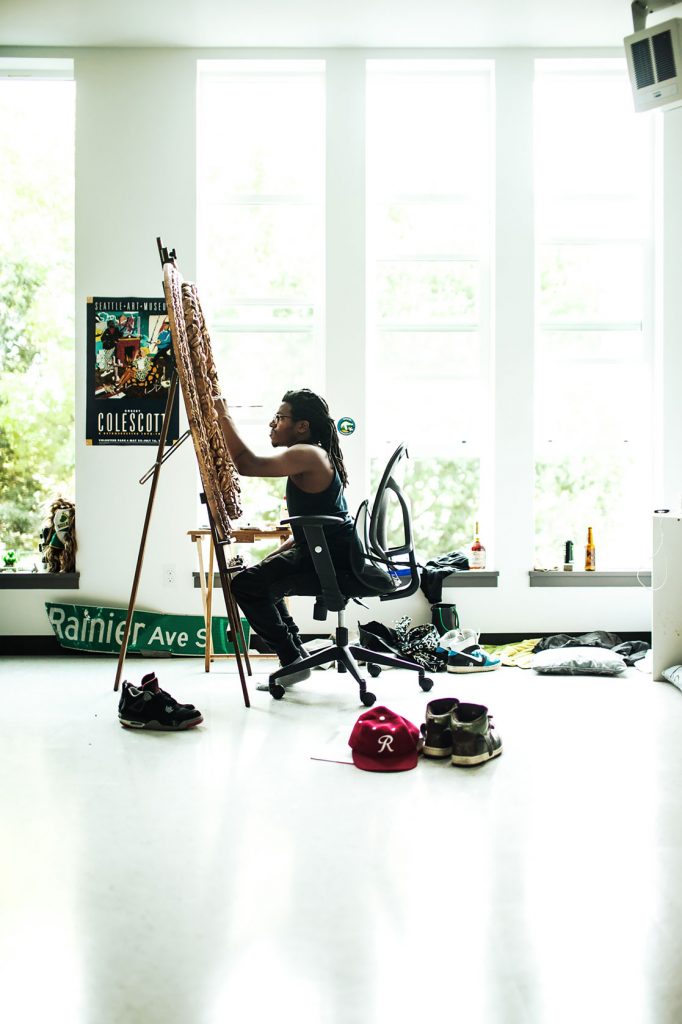 In a damp April chill, a line stretches around the block on a crowded Seattle sidewalk. Restless folk with mittened hands and cups of steaming coffee hunker down to spend the night. 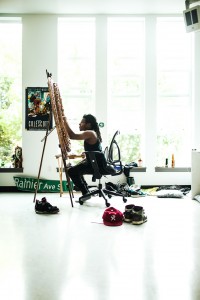 Nope, these are artists. Four hundred or so painters, sculptors, musicians, poets, and other creatives, each hoping to grab one of just 57 available rewards: a space to live and work in a sparkling new building made possible—and affordable—by Artspace, a wildly successful national organization.

Craig Cundiff is seventh in line. The 30-year-old with close-cropped hair and puppy-dog eyes has waited months for a chance to sit in this line. During the night, Cundiff chats with Admassu Guessese, a 38-year-old with a soft, sweet Ethiopian accent who’s two spaces back in line. Guessese compares the scene to a post-Thanksgiving shopping sale. “It is like Black Friday,” he says.

When the doors open at 8 the next morning, a few folks try to cut in line. But the all-nighters have maintained an informal written waiting list, ensuring that Cundiff, Guessese, and the other early comers have priority. With first-come, first-served tickets in hand, the two men face stacks of paperwork that lead to weeks of anticipation, until that magical day in July 2014 when they hold keys to their new Artspace apartments.

“It’s pretty much everything I wanted it to be,” says Cundiff more than a year later.

The Artspace story begins at the end of the Civil War. The nation needed storage space for westward migration and commerce, so Minneapolis-St. Paul built huge, ornate storage warehouses on the west bank of the Mississippi 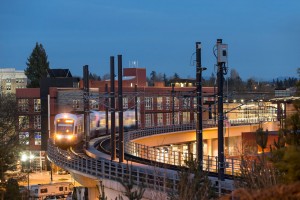 By 1986, Artspace evolved into a real-estate nonprofit, refurbishing entire buildings for the benefit of artists. Artspace pioneered the use of low-income housing tax credits to finance its first formal standalone project in St. Paul. Since then, the organization has received funding and partnered with local governments and like-minded nonprofits to offer below-market-value living and work spaces in 21 states and the District of Columbia. Many extensively remodeled buildings have historic pasts. Some, such as the Mt. Baker Lofts in Seattle, where Cundiff and Guessese now live, were built from the ground up. 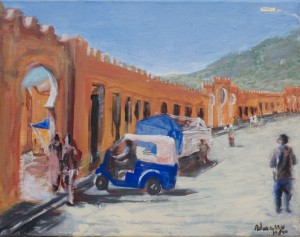 Most of us know the raging storm that submerged much of New Orleans in 2005 as Katrina. But to Cundiff, that tempest will always simply be “The Hurricane.” Cundiff was a 19-year-old Louisiana State University art student in Baton Rouge. He grew up in New Orleans’ Chalmette neighborhood, a few blocks east of the Lower Ninth Ward. When Katrina breached the city’s levees, Cundiff’s childhood home—and the houses of all his relatives—disappeared under 17 feet of water.

“Everybody evacuated to Baton Rouge,” he says. “I had 16 people, plus a couple of dogs and a couple of cats, living in my place. It was pretty much beds down the line and all the way around. It was probably four or five months with that many people.”

Cundiff quit college and got a job shoveling mud and hanging drywall. After nine months of hard but satisfying labor, however, he still considered himself an artist. New Orleans, alas, was in no shape to support would-be artists. By comparison, faraway Seattle seemed full of possibilities.

As a child, Cundiff filled reams of white printer paper with drawings, preferring vivid colors. Growing up 8,000 miles away, Guessese did the same. “In Ethiopia, there is a tradition for boys,” he says. “For the New Year, we go to the Addis Ababa market and get powdered primary colors—blue, red, and yellow. We mix [them] with water, create our own palette, and paint on office print paper. We give the paintings as gifts to family members and friends.”

Years later, Guessese discovered Seattle and moved to the city within months of his future Artspace neighbor’s arrival. At the University of Washington, Guessese majored in art history and minored in international studies. In 2012, he began curating art shows, trying to bring African art, especially painting, to the Pacific Northwest. He dreamed of opening his own gallery, where Seattle’s growing immigrant community might see—and display, buy, and sell—art from their own cultures.

In Seattle, some folks make a game of counting cranes—construction cranes, that is. Amazon, Starbucks, Microsoft, and a host of tech start-ups spur the building boom and attract thousands of new residents each month. Realtors compare Seattle’s current housing squeeze to that of San Francisco: Wealthier newcomers outbid those without such deep pockets. Artists, of course, are among those with the most modest means.

Over the course of 18 months, Cundiff’s rent increased by $400. He was a new father, paying bills by working endless shifts waiting tables. “At that point, [I was] too tired when I came home to really put in the work that I needed to put in to be competitive in the art world.”

Guessese also had a second job: repairing watches. He, too, knew he’d never realize his gallery dreams if rents continued to climb. Both men viewed Artspace as a way to break the cycle.

Only those with incomes 60 percent or lower than their region’s median are eligible to be Artspace tenants. For Seattle, that median income is almost $90,000. Monthly rent varies, depending on one’s annual take-home pay.

Artspace applicants who meet the income threshold need not make money from their art, they need only to show an ongoing commitment to it. Artspace is available to more than just visual artists like Cundiff and Guessese. Musicians, writers, poets, tattoo artists, filmmakers, and dancers all rent from Artspace, with fresh categories added with each new location.

For Cundiff, the building’s creative mix has proved magical. “There’s a piano player who lives two doors down. He’s in a reggae band. I bring my easel down there, he’ll play piano, and I’ll work on art. In that little hour or two hours, neither of us wants to quit. We just want to keep going ’cause the other person’s going. I probably work more in that two-hour gap than [I would] in a week … because I don’t want to put the pencil down,” says Cundiff. “I don’t want to stop working, ’cause he’s just killing it on the piano.”

A writer-poet-philosopher lives one floor below. Cundiff knocked on his door while studying a concept known as l’appel du vide, or “the call of the void.” Simply put, it’s the strange—and almost always unheeded—urge some people get to jump from high places, such as a bridge or a cliff. Cundiff and his philosopher neighbor spent hours exploring the complicated nature of free will: Nothing stops us from leaping into the void, save all the connections to others we’ve spent a lifetime building. “I’ve come to this realization: There’s an infinite amount of space outward as well as inward, and the intersection between the two is the connection,” Cundiff says. “That’s what the feeling is.” 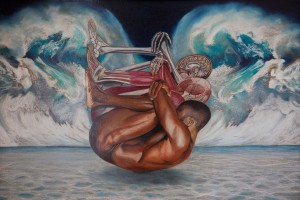 His paintings started featuring anatomical drawings at various depths of the human form: outer skin and hair in one rendering, subcutaneous musculature in the next, skeleton in another. Bold colors. Body parts. Exquisite juxtapositions. The creations immediately call to mind Frida Kahlo, and the similarities are no accident. Cundiff, who occasionally sports a T-shirt bearing her portrait, says he discovered the Mexican painter’s work through her husband. “In high school, I was a big Diego Rivera fan,” he admits. “I wanted to be a muralist. And lo and behold, he had a wife who was a pretty good artist.”

If Kahlo’s lifetime of pain informed her painting, was Cundiff’s experience after The Hurricane a similar motivation? “It’s easy to lie with your art and not get to the truth and get to that meat of suffering,” he says. “Kahlo did it so effortlessly, with such beauty and grace. Her light was a pure truth. My use of anatomy is a way to look inside a person while seeing the outside, too. It’s the duality between isolation and connection.”

Mt. Baker Lofts is the fourth Artspace site in the Seattle region. It was built in one of Seattle’s most diverse neighborhoods, a few miles south of downtown. Significantly, it’s adjacent to a major bus and light-rail transportation hub, allowing most Artspace residents to forgo the expense of owning a car.

Before he landed one of the 57 brand-new apartments, Guessese had already saved enough watch-repair money to sign a lease for a street-level retail space in the same building. He calls his business Tobya Gallery, using the Amharic word for “Ethiopia.” Within months, he opened shows for Ethiopian artists Kerima Ahmed and Emanuel Tegene. The art was first-class, and the shows were well-received, but the going has been tough.

Many in his target audience of recent immigrants have no idea his gallery exists and have little cultural experience with the business of art. Like any good gallery owner, Guessese invests in mailings and posters, carefully curates his shows, and stays on top of social media. He plans to teach introductory art to children, especially those in the immigrant community, and to sponsor workshops featuring touring artists. “My priority is to keep the gallery going: Find money, pay the rent, and organize strong shows,” he says.

One of the strongest shows, it turned out, got its start right down the hall. Artspace allows its residents to display their art along the apartments’ corridors, an offer Cundiff accepts with relish. Dozens of his paintings line the hallway outside his door, drawn from several periods of his work. The portraits. The landscapes. The existential anatomical drawings.

“Art has to say a lot more than just to … be art just for the sake of art,” says Guessese. It should also say something, and I see that something in Craig’s art.”

Cundiff’s was the first non-African show in Tobya Gallery, and the opening was a big hit, with “lots of beer, lots of pizza, and lots of good friends who came out to support my show,” says Cundiff.

“It went well past midnight,” says Guessese, smiling at the memory.

Since then, Guessese has continued to expand his reach. A recent show featured Vietnamese-American artist Chau Huynh, reflecting on her experience during the Vietnam War. One striking piece features holes carved in a book, evoking bomb craters outside the door of her childhood home.

Cundiff, too, is expanding. “Call of the Void” opened in Brooklyn’s IMAGE Gallery on Sept. 11, the 14th anniversary of the terrorist attacks on the United States. He appreciates that a New York City gallery show is a long way from shoveling Mississippi River mud. 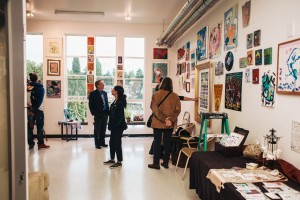 Because of Artspace, Cundiff now waits tables just three days a week; his goal is to cut that number down to two. And, as Seattle rents continue to climb, he sees more artists moving to the Mt. Baker neighborhood, bringing more traffic to Guessese’s gallery. In some ways, both men are still in line, holding numbers as they wait tantalizingly close to fame’s bolted door.

“It’s hard to be unknown.” says Cundiff. “I mean, that’s the struggle of the art world in general, isn’t it? But if you can make it a couple of years, the momentum will grow. Places like Artspace, made to keep artists in the scene, are only going to make it better for everybody.”

Jack Hamann is a writer and documentary producer. His website is nolittlethings.com. 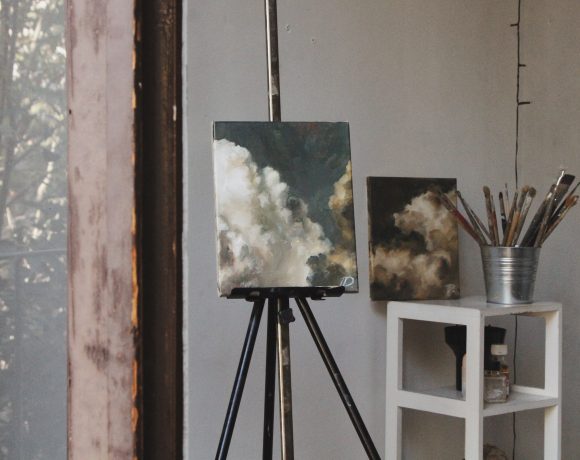 How to Properly Light Your Art Studio 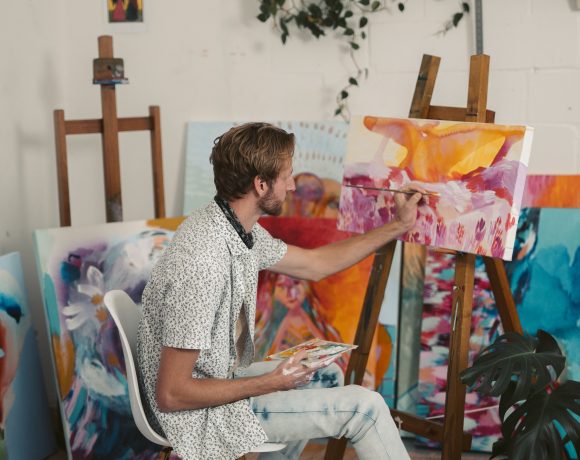 How to Create an Art Studio Space at home 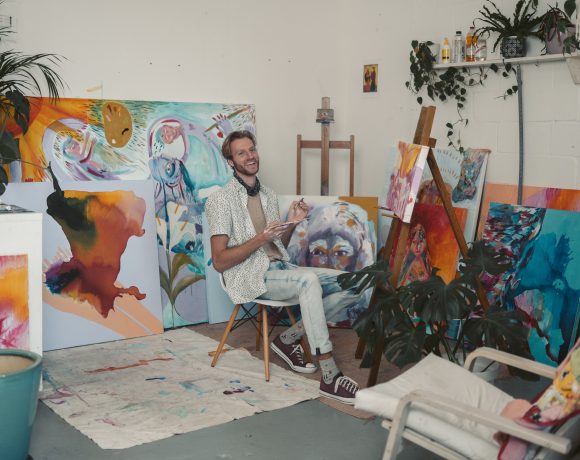 Important Factors to Consider When Looking for a New Art Studio