Selling in the Time of Covid

Better Than a Movie: Incredibl.. 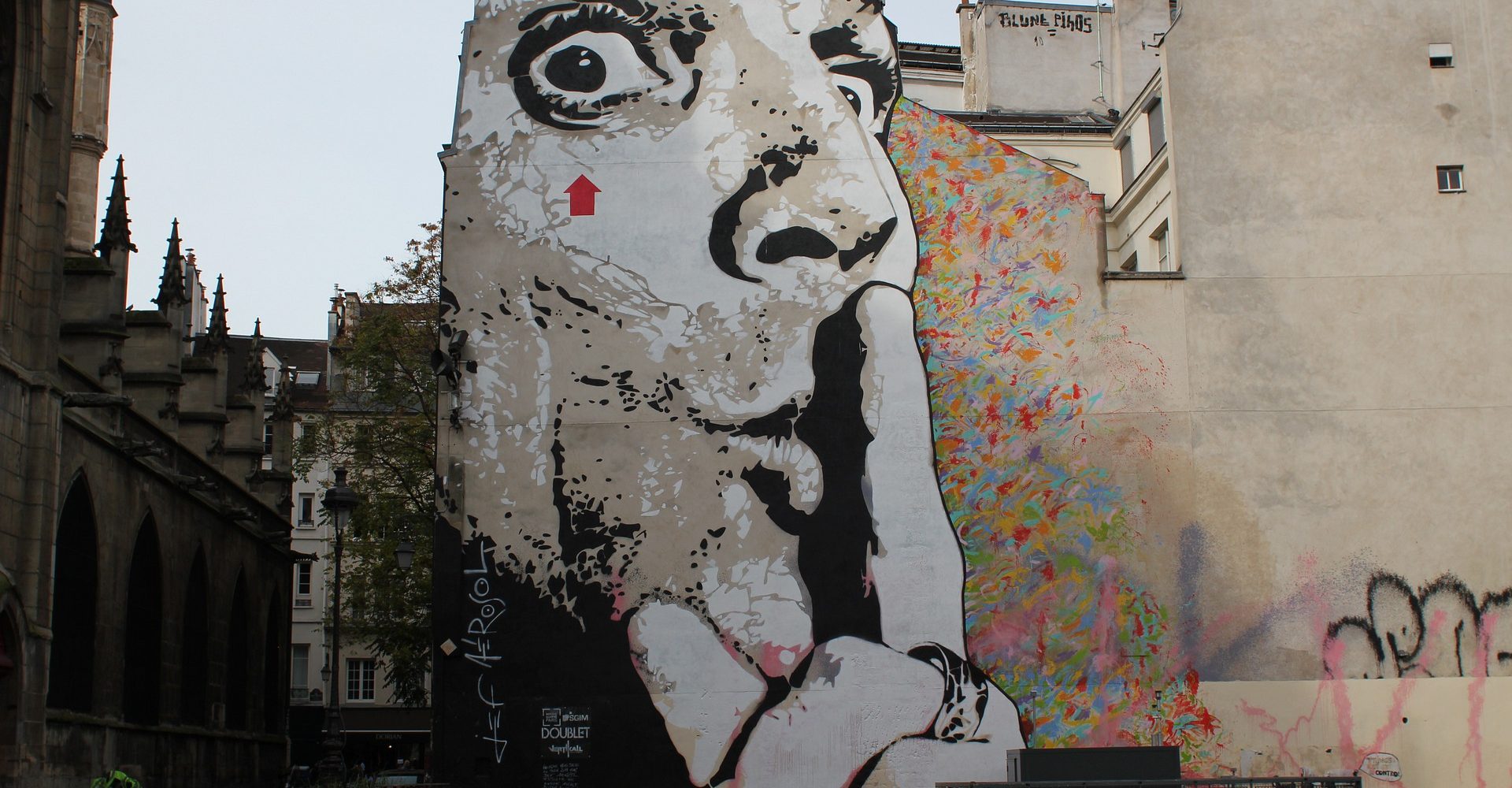 Graffiti in the center of Paris is a unique form of contemporary art. In fact, you don’t have to go far to find street art in Paris. A stone’s throw from the Louvre, at 59 rue de Rivoli, the entire building is devoted to artists’ studios: there are about thirty ateliers on six floors. The building itself, from the doormat to the roof, from the walls of the entrance to the windows, in short, the whole house itself is a work of art. It is painted and covered with amusing inscriptions, and concerts, exhibitions, and performances are constantly held there.

You can walk into the atelier at any (almost) moment and watch the artists at work. The house at 59 Rivoli is open to the public 7 days a week, 24 hours a day-an extremely rare occurrence in Paris! And it’s absolutely free, and you can take lots of unusual Parisian photos here.

The artists will be very happy if you buy something from them — a painting, a sculpture, a piece of work, or leave some money in the common piggy bank.

Other centers of contemporary art in the French capital are near the Pompidou Center. And there, it’s definitely art. Sometimes there are also exhibitions of graffiti artists in private galleries. For example, in 2019-2020, Espace Lafayette-Drouot exhibited a collection of reproductions by Banksy.
But today we have prepared for you a whole amazing walk through the streets of Paris to get you closer to its street art.

We offer an itinerary in Paris, during which you can discover a city unfamiliar to most people — the “people’s” Paris with its street art.

The route passes through 4 districts — the 10th, 11th, 19th, and 20th — and is designed for 3.5 hours.
The 19th and 20th arrondissements are the birthplace of Parisian street art. Its various forms (mosaics, graffiti, stencils, murals…) can be found on every corner. If you do not have much time, you can confine yourself to the Seine quays (between Quai de l’Oise and Quai Valmy) or the quarters of Belleville and Buttes Chaumont.
Either way, this unusual walk through the former working-class neighborhoods will be a unique opportunity to appreciate street art.

We will start at the intersection of the Gironde and Oise quays, next to the Corentin Cariou metro station (line 7). To get to the embankment, from the subway you need to walk along Rue Rouvet. Passing the Promenade Ouaz, you will see walls with graffiti. The supports of bridges often serve as material for street artists. Graffiti and stenciling decorate the walls along the waterfront. If you walk along the waterfront on a Thursday or Sunday morning, you can experience the Joinville Market at the intersection of Joinville and Jomard streets. The market is open Thursdays and Sundays from 7a.m. to 2:30 p.m. 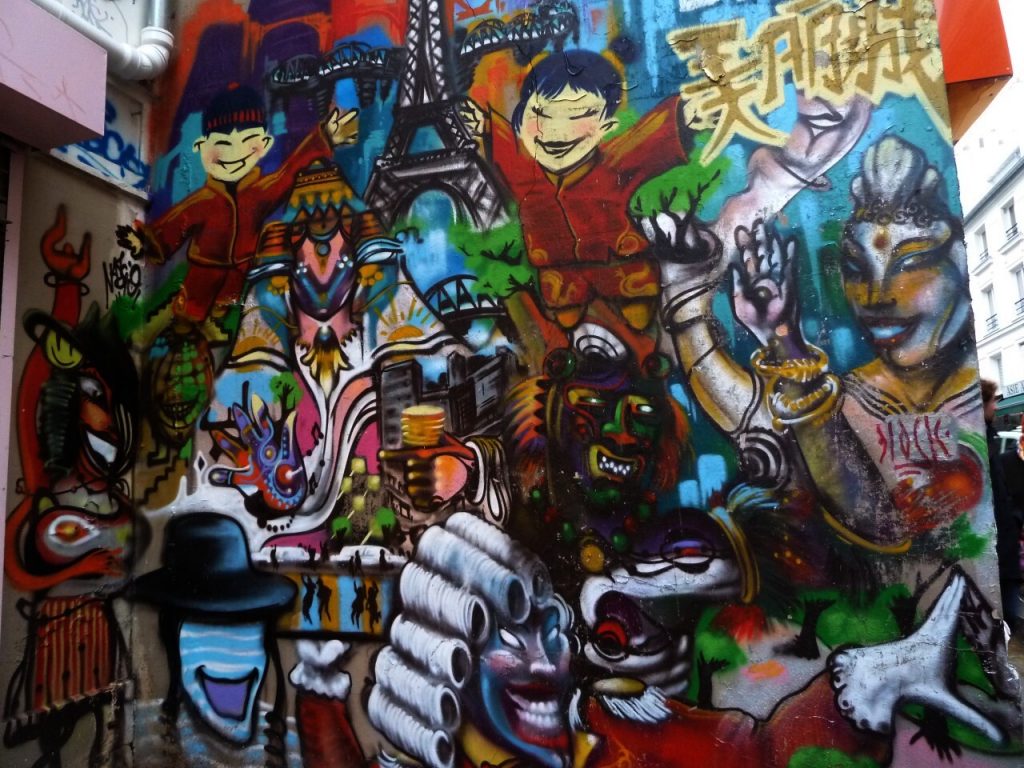 There isn’t much street art from the Seine Quai to Place de la Rotonde, but you can see the many ships and barges moored to the shore. This neighborhood was redeveloped in the late ’90s and has become more welcoming and dynamic. In the summer beaches along the promenade are laid out. MK2 cinemas are located on both banks. 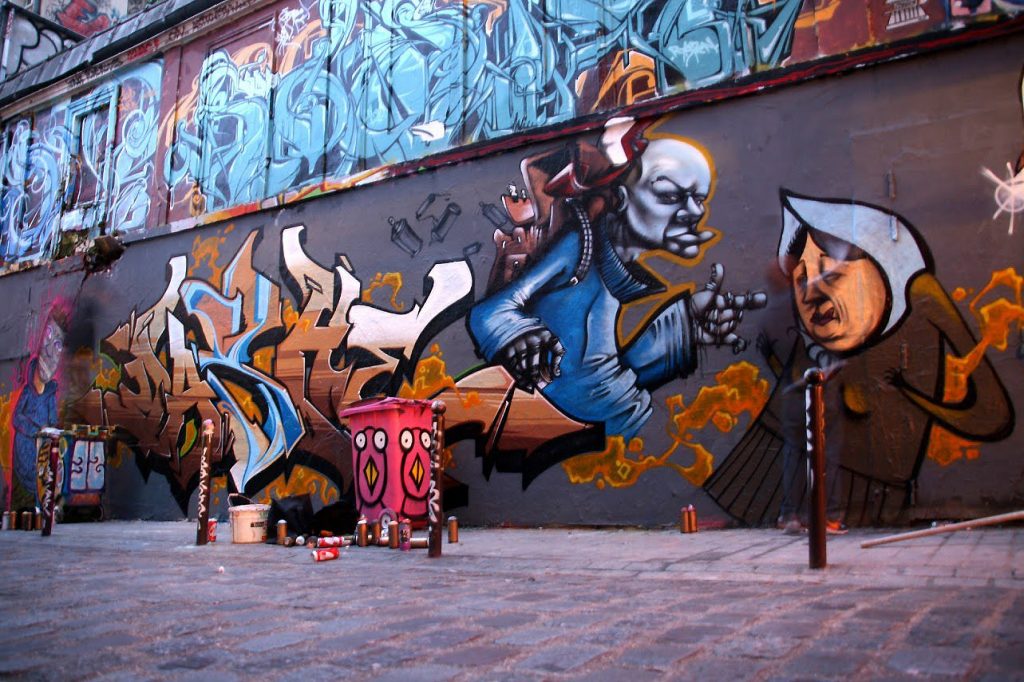 Take a walk along the Saint Martin canal toward the Parc de la Villette. This is already the 19th arrondissement, a disadvantaged and cheap place to live in Paris. During your walk, you are sure to see graffiti. Unfortunately (or fortunately!), this neighborhood is now being rebuilt, with old housing being torn down to build new buildings. The graffiti is disappearing with them.
The start of the Valmy promenade at the corner of La Rue Lafayette marks the return of street art to Le Canal Saint Martin. Le Point éphémère and le Café éphémère have contributed greatly to the development of street art on this part of the canal. The high wall at the beginning of the Valmy promenade is worth a look – a mural by Goldorak in stencil technique. Goldorak is a famous robot from the pop manga of the 1980s.
The walls near the Ephemeral Café are all decorated with street art of various styles and forms. On the Quai de Jemmapes (on the other side of the canal), you’ll see Spaces Invaders icons, some in unexpected places, like the walls of public toilets. On the other side of the waterfront is one of the last remaining industrial buildings, the Clairefontaine-Egzacont factory. A little further on, don’t forget to stop in front of the famous wall adorned with graffiti. 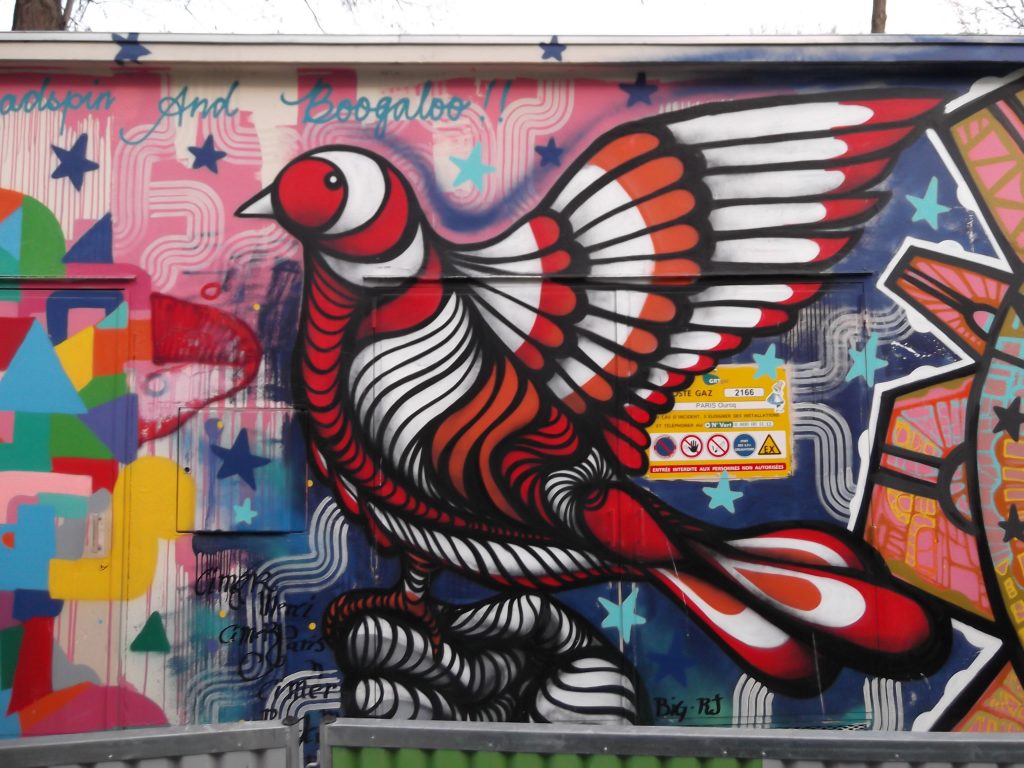 Take the Rue du Faubourg du Temple up to the Belleville Metro station. For the shopping lovers, the boutiques in this street are also open on Sundays. Stroll the streets hidden in the depths, away from the tourist routes, and uncover the gems of contemporary art. In front of the entrance to the Cour de Bretagne you’ll see several frescoes, collages and graffiti. Walk in front of the Palais de Glaces, the famous Parisian theater where comedies are played every night. Continue along Rue du Faubourg du Temple to the famous Chinese restaurant Le Président, frequented by Presidents François Mitterrand and Jacques Chirac. This is the starting point of the Belleville Cosmopolitan district. 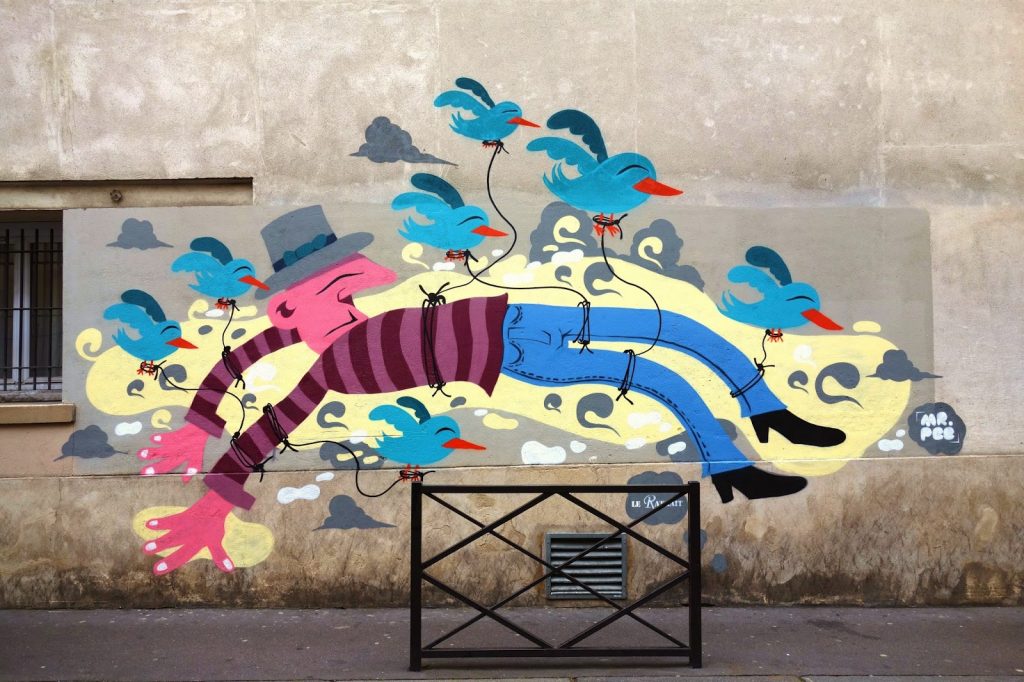 Then walk up Rue Belleville to café Les folies and visit Rue Denoyez, the street of Parisian street art. This is the symbol of street art: the walls here are completely painted with graffiti and trafferet. Street artists are constantly bringing something new and remaking the old in the works on the walls of Rue Denoieu. There are also numerous art galleries located here.
After looking at the works on Denoieu and Lemon Street, return to Rue Belleville and walk to the intersection with Rue Julien Lacroix. Here you will see a large mural of a detective and a wall showing a worker in the process of painting a wall.

Go further down Rue Belleville and turn to Rue Rebeval, then to Rue de l’Equerre. Near the steps, you will see an icon of a space invader and a collage. Go up the steps of the street and turn left on Avenue Simon Bolivar (l’avenue Simon Bolivar), reach the park of Butte Chaumont.
In the park, along L’avenue Jacques de Liniers, you’ll climb to the top of the Butte Chaumont and see a magnificent view of Paris and the Basilica of the Sacré Coeur.
On your way back, take the circular road du Lac to l’avenue de la Grotte, continue on l’avenue JC Cave. Near the middle of this avenue, you will find old railroad tracks, known as the “mysterious way”. Along these abandoned tracks you can see a lot of graffiti.

We should not forget that Paris is not just a city of aristocrats. It is also the city of artists, writers, and other bohemians. A century ago, Picasso and Modigliani paid for their paintings to hang in cafes, and now their works hang in museums. Perhaps today’s artists will also find recognition at the next turn of the century.

Author’s bio: Jean Hartley is a professional content writer for CustomWriting service. She will help you to prepare an overview, report, essay, or another paper. Jean will make you amazed with the final interesting content or any other you may have for writing. 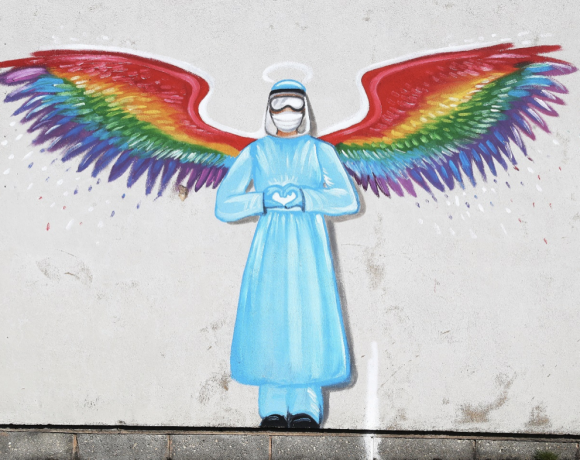 COVID-19 Murals: Inside the World of Pandemic-Inspired Street Art 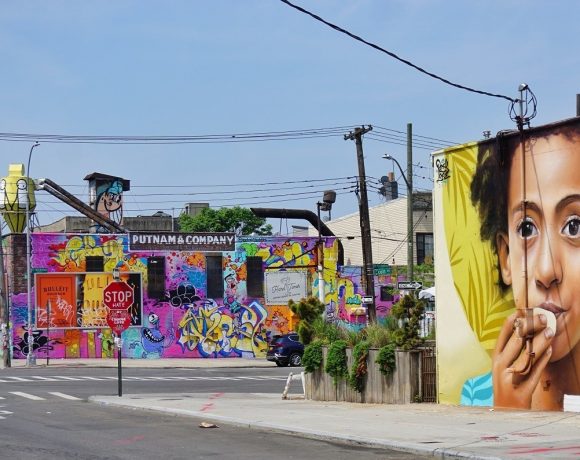