How to Start an Art Gallery

Can Art Really Make You Happie.. 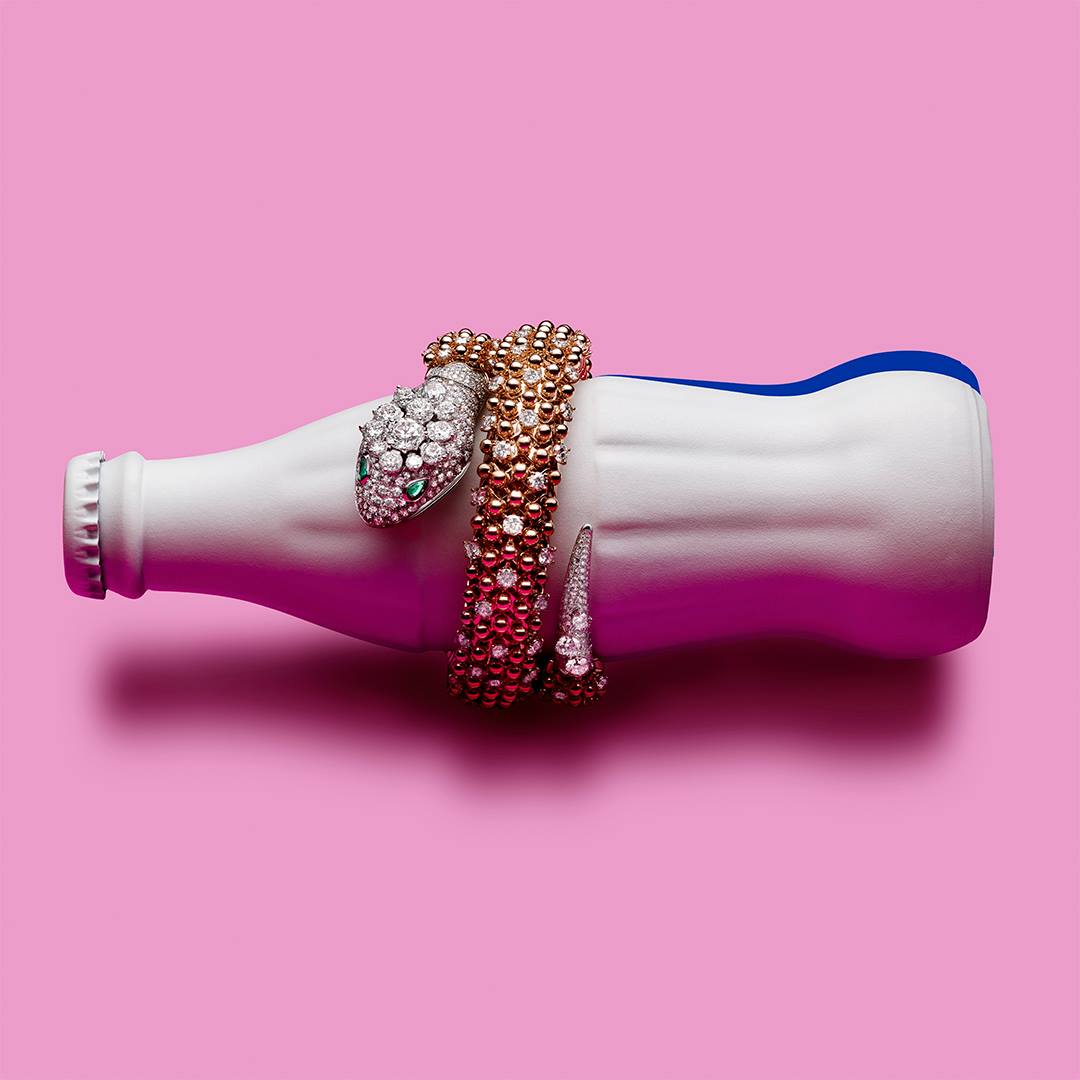 One of the most enduring characteristics of art is its ability to encompass all mediums. If something can be used as a means of expression, it can be used to create art. In the same way that painters, sculptors, writers, etc. all create their works, jewelers use mediums such as metalsmithing and lapidary. As a result, there are many kinds of jewelry that evoke major art movements, either at the height of their popularity or retroactively. We have compiled some examples below. 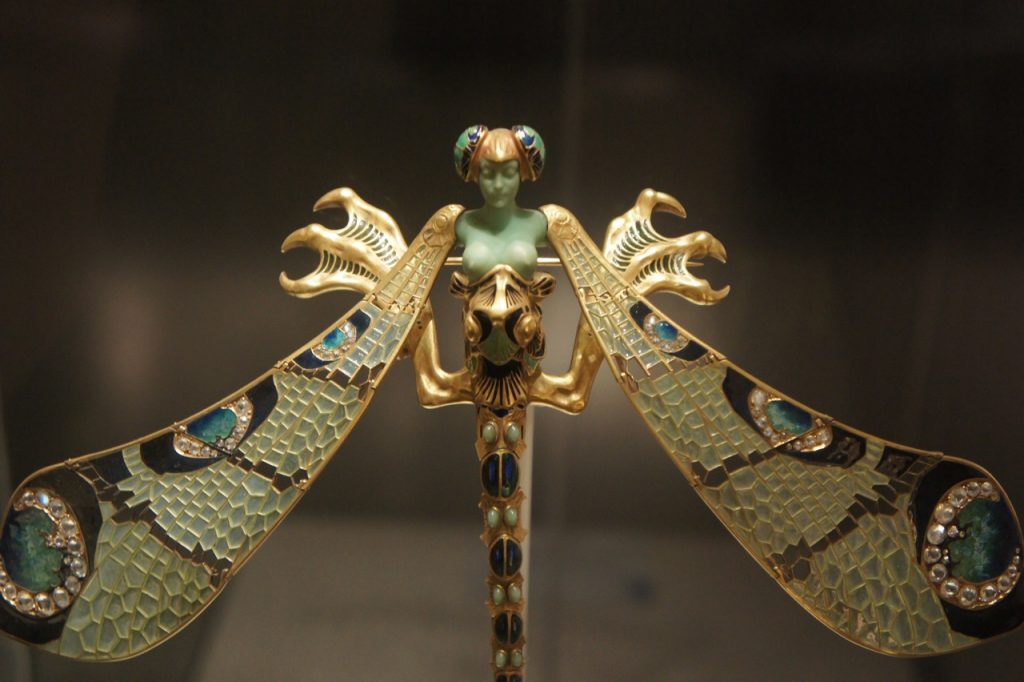 The Dragonfly Woman is one of the most notable works by French jeweler Rene Lalique. This corsage ornament was created in 1897, towards the latter end of the Art Nouveau movement that had made its way through Europe and the United States with its decorative style characterized by sinuous, asymmetrical lines.

Consisting of various materials such as gold, enamel, chrysoprase, chalcedony, moonstones, and diamonds, the Dragonfly Woman strikes a contrast between a regal female figure and an elaborate insectoid with large claws. This piece was presented at the Paris Exposition in 1900 and was later acquired by Armenian businessman Calouste Gulbekian in 1903.

The Works of Elsa Schiaparelli – Surrealism 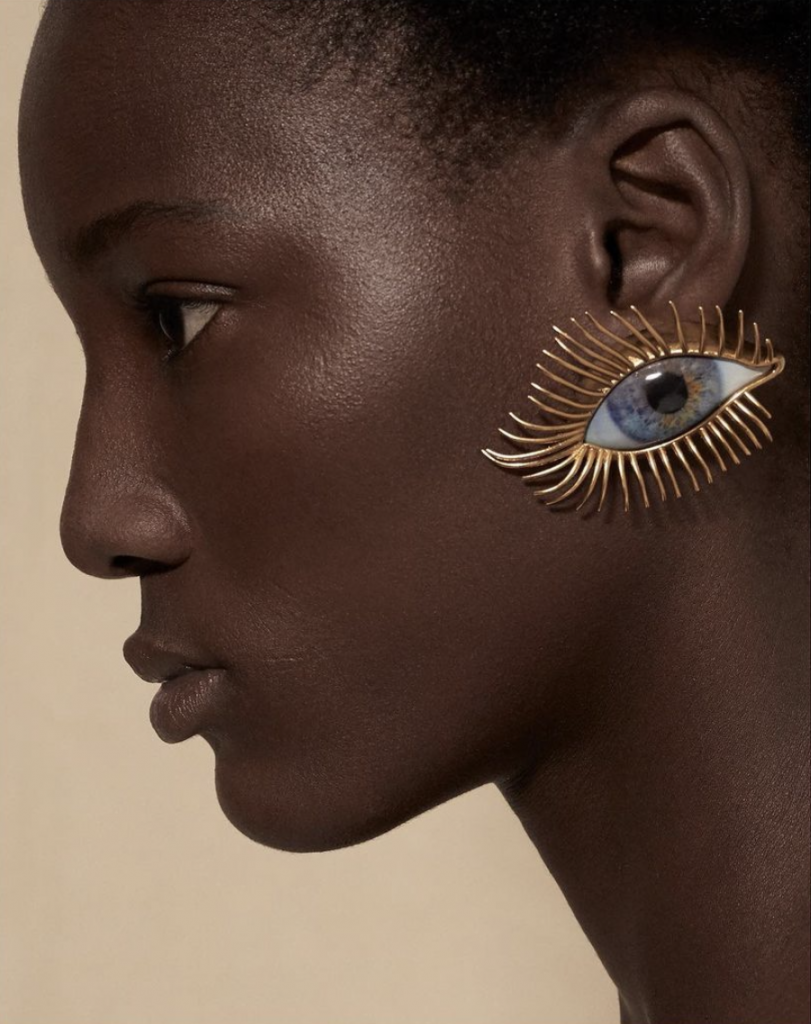 Founded in 1924 by Andre Breton in Paris in 1924, the surrealist movement’s goal was to counter the restrictive boundaries of rationalism and liberate thought, language, and the human experience by eschewing typical structures in favor of the irrational, poetic, and revolutionary.

One of the earliest pioneers of surrealist jewelry is Elsa Schiaparelli, one of the most famous fashion designers who was herself influenced by known surrealists Salvador Dali and Jean Cocteau. One of her most notable surrealist works is her 1938 rhodoid necklace studded with metallic insects, giving the impression that the wearer has bugs crawling on their skin. 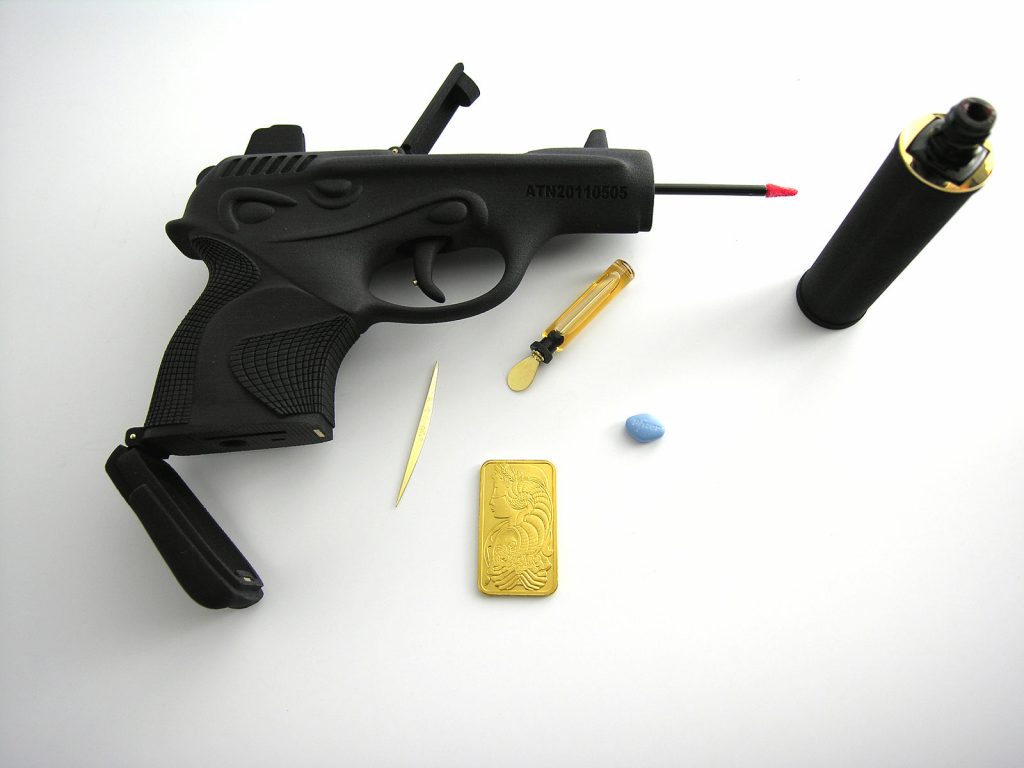 Image: 7 Necessities for a Woman by Ted Noten

7 Necessities for a Woman is a piece of art made by conceptual artist Ted Noten, consisting of 3D printed nylon guns with 18-karat gold details. These guns contain compartments for the eponymous necessities, such as lip gloss in the muzzle, a pill compartment in the loading chamber, a toothpick, a hairpin, and a small vial of perfume.

This commentary on how femininity is subject to patriarchal standards is a prime example of conceptualism, a movement that arose during the late 1960s with the purpose of enforcing ideas and theoretical practices as opposed to the creation of visual forms. 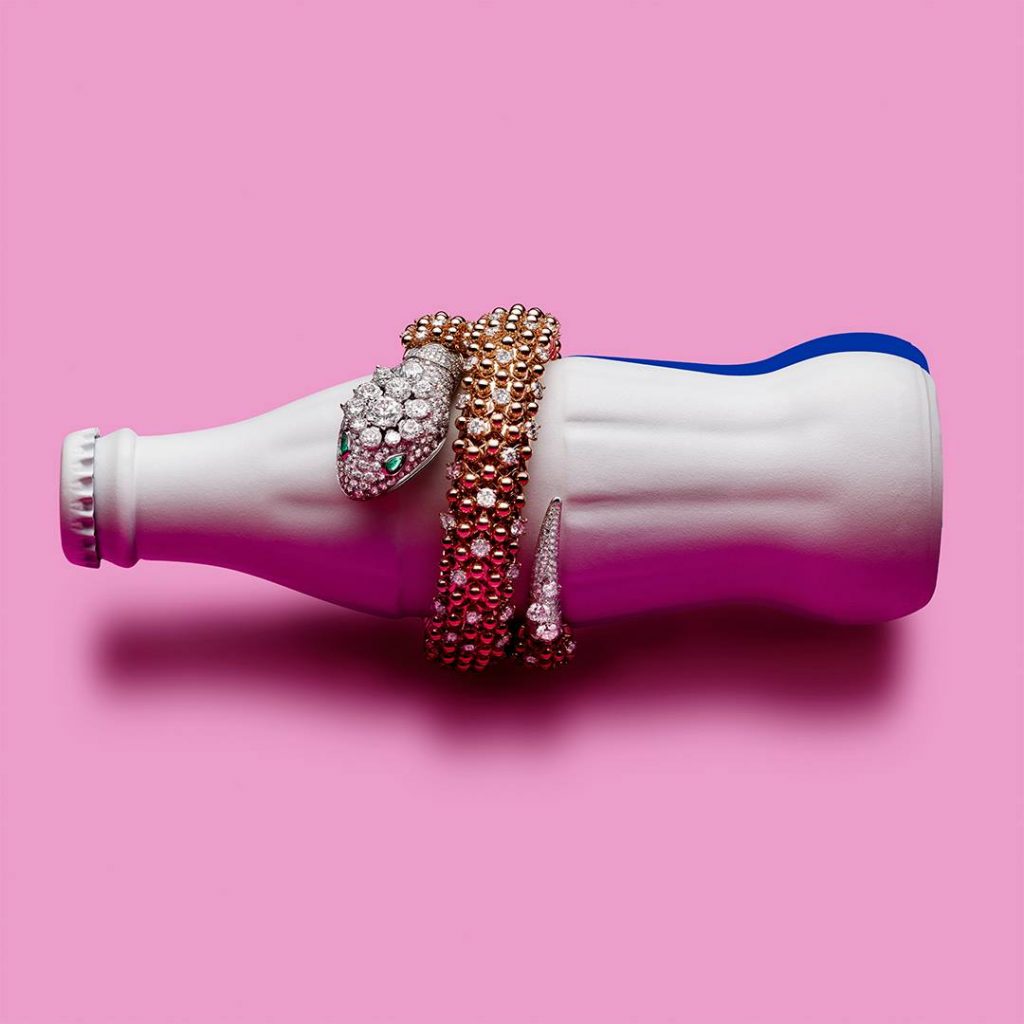 There are few names that are as synonymous with pop art as Andy Warhol, renowned painter, printmaker, and filmmaker. His style, which drew heavily from pop culture and employed commercial imagery to create accessible works of art, inspired Italian luxury brand Bulgari to create various works of jewelry celebrating 80s pop culture.

Various gemstones, such as diamonds, emeralds, amethyst, peridot, rubellite, onyx, and aquamarine have been combined to represent synthesizers, marijuana leaves, hair curlers, UFOs, and even Ronald Reagan. This line of jewelry was unveiled at a launch party at the iconic Stadio dei Marmi in Rome. 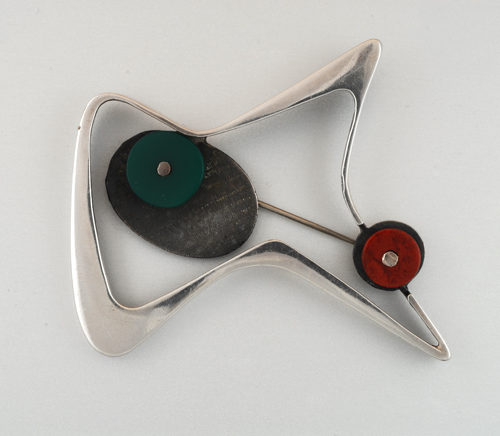 Constructivism was a movement established in Russia in 1915, existing as an embracing of industrial society and urban space, rejecting decorative stylization in favor of calculated and functional assemblage.

Margaret De Patta was a jeweler who embraced constructivism. Her jewelry was a combination of silversmithing and lapidary that, while not as flashy as her contemporaries, made use of visual effects such as light refraction, image reflection, and magnification, resulting in De Patta referring to her specially cut gems as opticuts.

The Works of Alexander Calder – Primitivism 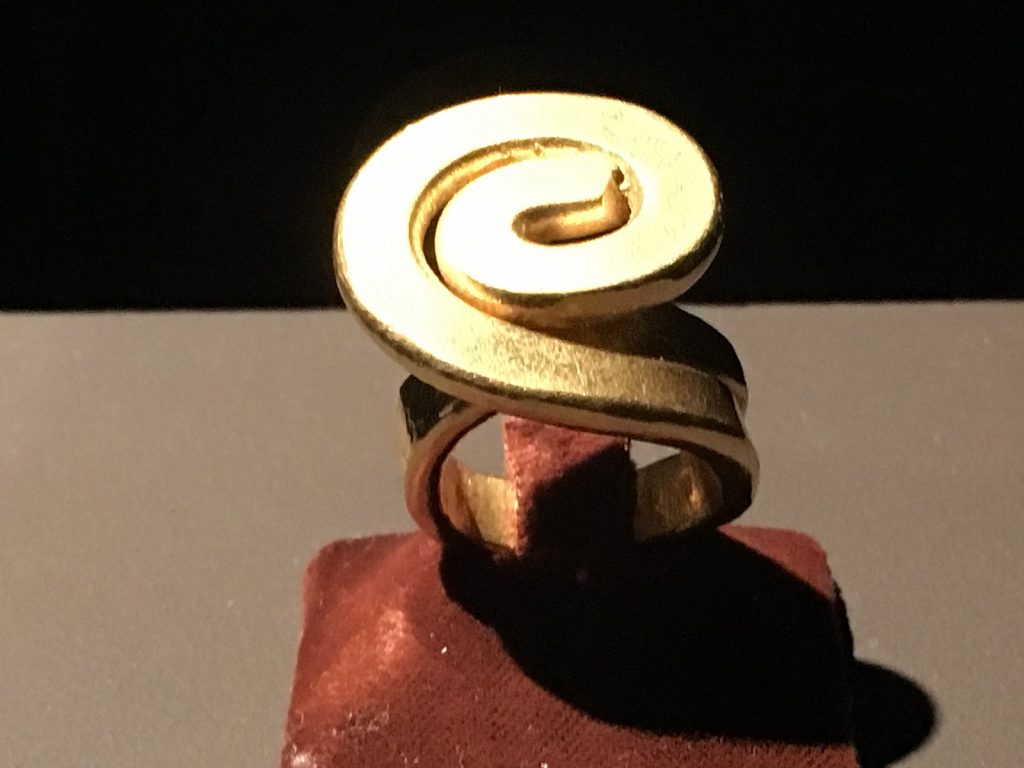 Primitivism is a movement that was born from a reaction to both anxieties of advancements in technology and an examination of the symbiotic relationship between older cultures and nature. This movement manifested in various artists creating works inspired by iconography associated with those cultures.

Alexander Calder was an artist who produced over 2000 pieces of jewelry that reflected his fascination with African tribes. To this end, he used materials such as brass and steel, with bits of ceramic, wood, and glass, and he also adopted their methods, using snippets of wire or fashioned rivets to connect strips of metal instead of the more typical solder. 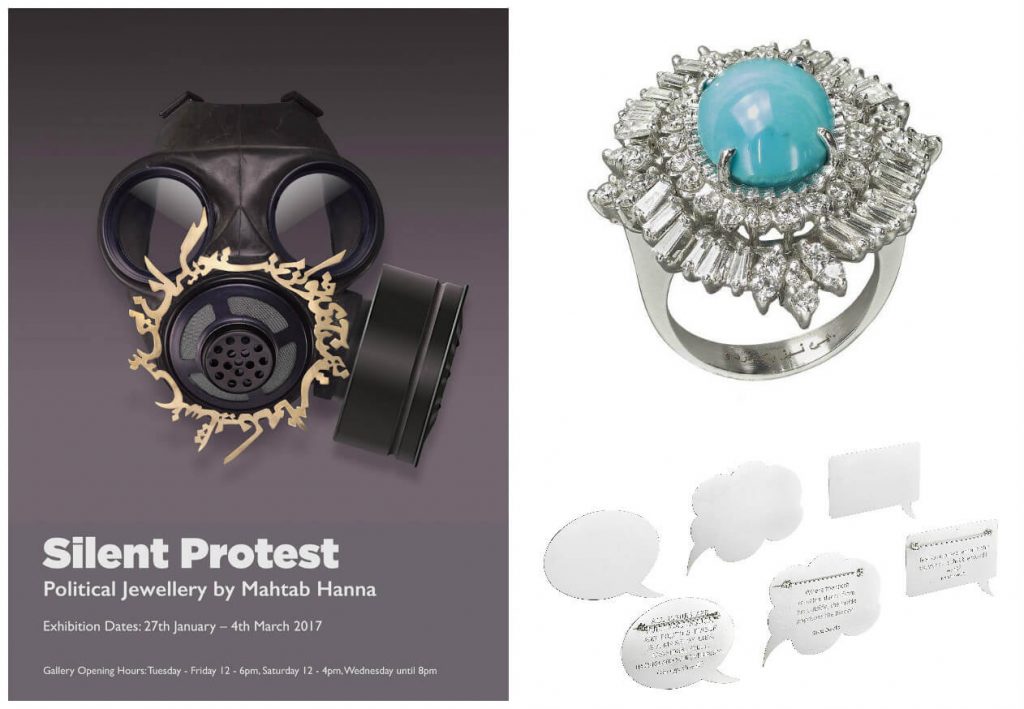 Dadaism was a reactionary art movement established in response to the First World War. Its defining characteristic is that it is strictly anti-establishment, exposing accepted and repressive societal conditions through the rejection of conventional artistic practices. This form of artistic protest continues to this day across multiple mediums.

One of those mediums is protest jewelry, which was examined in 2017 by British-Persian jeweler Dr. Mahtab Hanna in her show Silent Protest. The show illustrated the connections between wearable art and social commentary by combining decadent jewelry with representations of power and struggle.

The Works of Art Smith – Modernism 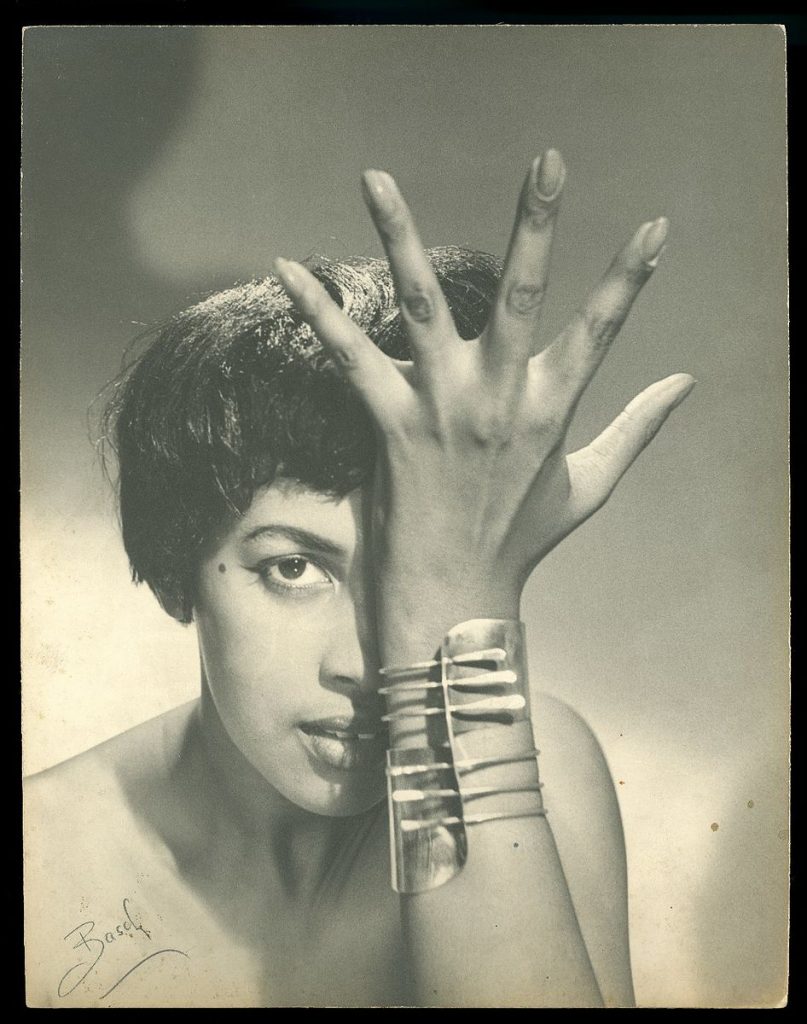 British Caribbean jeweler Art Smith was a pioneer of the modernist jewelry movement, creating various large pieces that combined surrealism, biomorphism, and primitivism. They were designed to be worn by avant-garde dancers whose movements reflected the free-flowing style the jewelry evoked.

The modernist movement itself was born during the late 19th/early 20th century because of broad societal changes that many artists believed should herald in new styles of art that could better reflect the newly emerging industrial world. By combining African tribal jewelry and dance that incorporated jazz, a genre of music pioneered by African American artists, Smith used his art to create a modernist statement rejecting the suppression of African American culture. 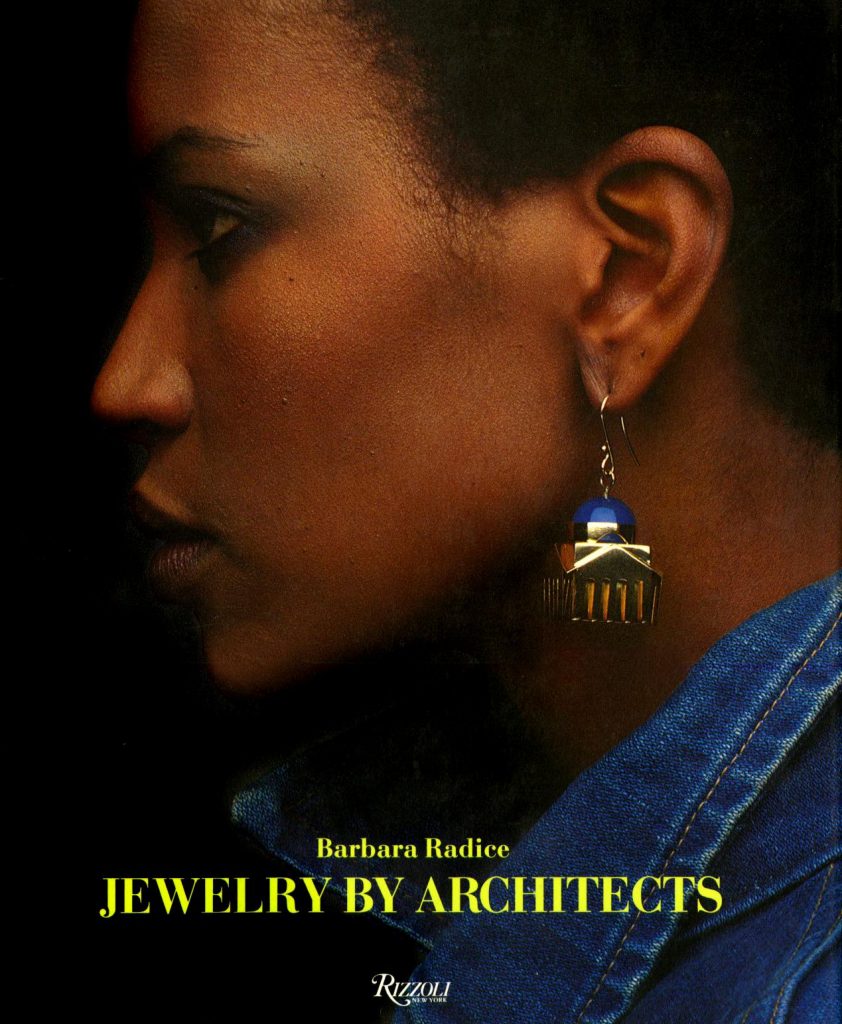 Image: The Book Cover to Jewelry by Architects by Sight Unseen

Postmodernism is a broad art movement that exists to highlight how knowledge claims and value systems are contingent or socially conditioned. In terms of jewelry, postmodernism functions similarly to how it did for architecture, in that postmodern artists were rejecting the rational combination of function and form, deeming it aesthetically unpleasing. As a result, the goal of both postmodern architecture and jewelry was to be visually extravagant and unconventional while still retaining some semblance of function. 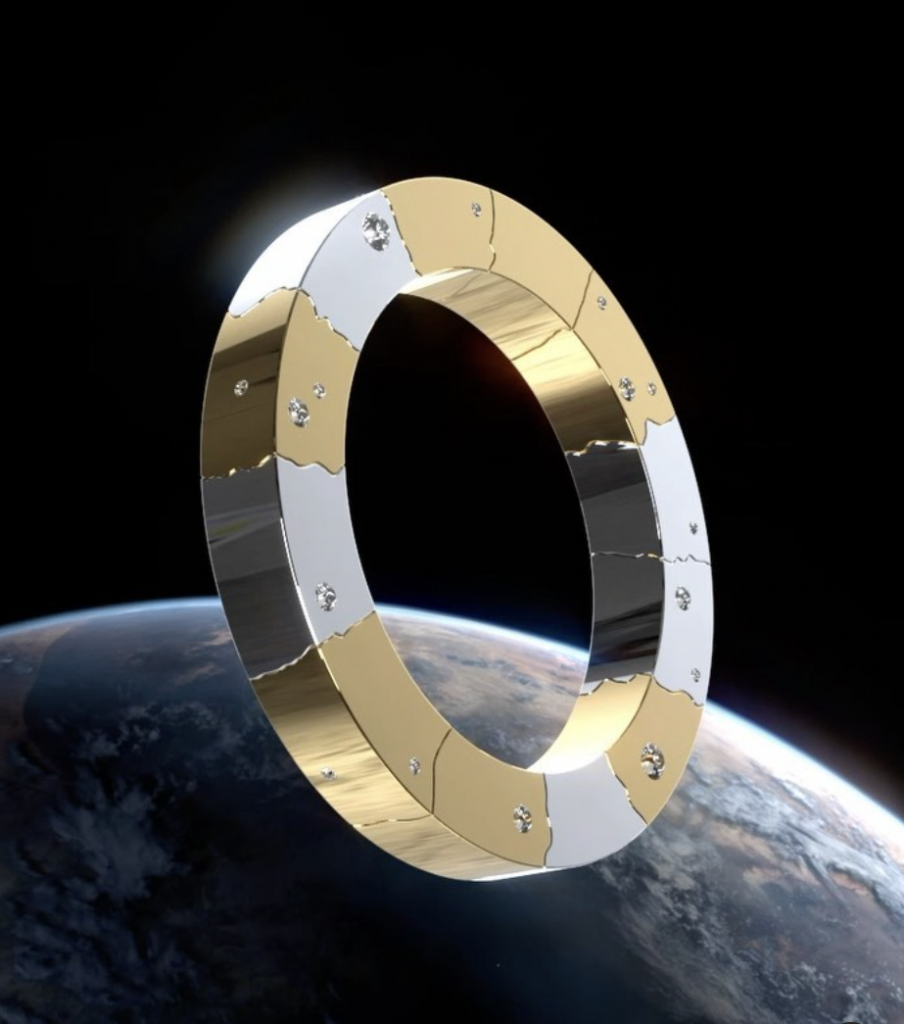 As digital mediums not only grow in sophistication but become more accessible to aspiring artists, the works of art that can be created from those mediums follow suit. Blockchain is a modular work of jewelry art created by Simone Faurschou that takes this concept to its logical conclusion.

Blockchain exists both physically, as a series of uniquely designed white and yellow gold blocks, and within the digital realm as an NFT (non-fungible token), a crypto asset that records ownership of a digital item. With NFTs being made from all kinds of art including paintings and music, it only makes sense that jewelry follows suit.

Author Bio: Chris Holdsworth is a member of the Gemmological Association of Australia and the National Council of Jewelry Valuers and has diplomas in Gemmology and Diamond Technology. His family started Holdsworth Bros. Jewellers in 1884 and Chris now runs the business with his brother Tim. 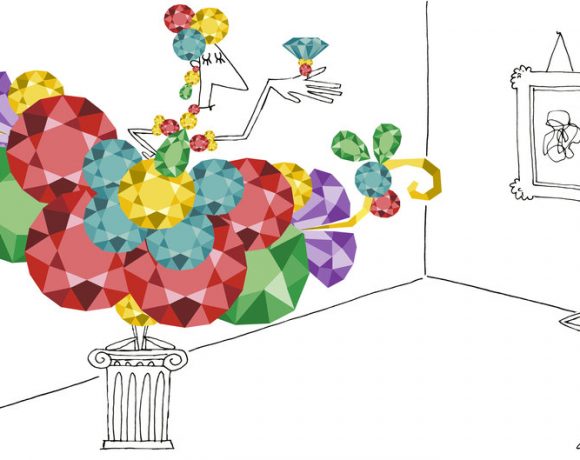 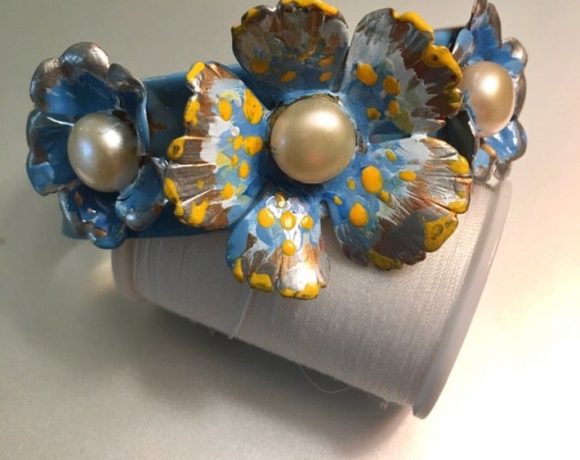 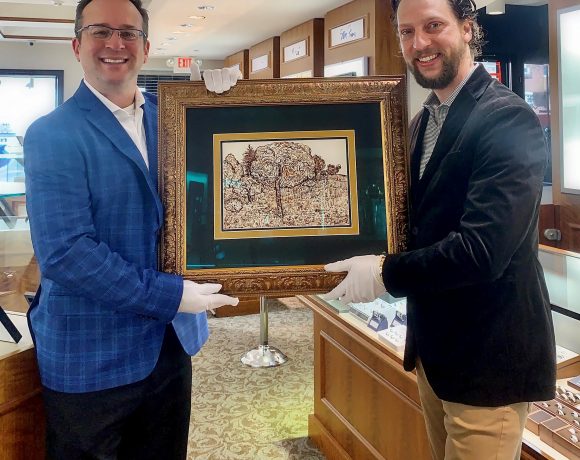