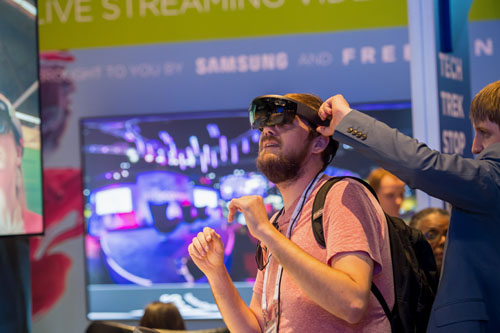 Art is both an agent and a reflection of cultural change, and society’s overwhelming infatuation with technology is presenting artists, galleries, museums and public spaces with new opportunities to excite the public’s imagination through captivating and immersive art installations. Using cutting-edge audiovisual technologies such as projection mapping, augmented reality, virtual reality and immersive LED displays of all sizes and shapes, artists and organizations are tapping into the modern digital landscape to create and share memorable digital experiences.

The three innovative art exhibits described below demonstrate how audiovisual technologies are enabling new experiences, engaging visitors in new ways and providing the ability to turn any space into an immersive digital art exhibit.

For the 100th anniversary of the discovery of King Tut’s tomb, IMG partnered with Design Electronics to develop a traveling exhibit called King Tut: Treasures of the Golden Pharaoh that leverages immersive projection systems, creative audio features and projection mapping to deliver an engaging tour for visitors of all ages.

The first thing visitors see in the exhibit is an animated video that identifies artifacts and their roles in Tut’s mummification process. To truly engage and capture the attention of the audience, Design Electronics created a 23-foot-wide, seven-foot-tall projection screen that wraps 180 degrees around visitors and is positioned slightly overhead so viewers can gaze up at it as they would a night sky. As this intro video ends, lights activate and the doors open to the next gallery  – each gallery in the exhibit is designed to move people through with a natural flow. 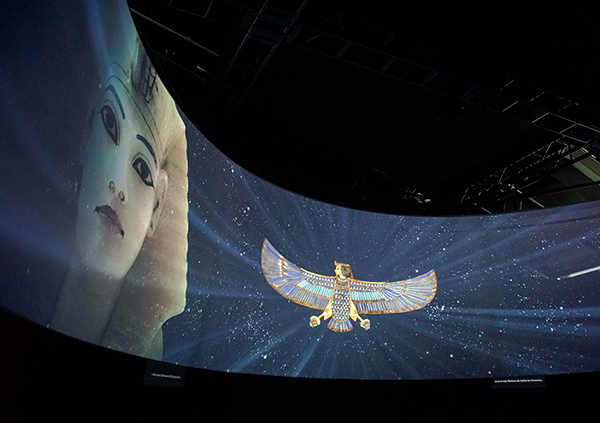 Sound also plays an important role in the flow and sensory experience, according to Khalil Williams at Design Electronics. “We use sound to spatially create the effect that you are passing along with Tut,” Williams explained, adding that IMG was a big proponent of high-quality audio to complete the effect. Determining the appropriate sound levels was another key consideration to properly present the exhibit to visitors of all ages and cultural preferences as it travels around the globe.

The exhibit’s technology also needed to highlight the importance of the physical artifacts without overshadowing or distracting from them. Williams said the alternating digital and physical aspects “maintain a certain attention span, with pop-ups of experience to keep things fresh as they go through.”

In one location where the exhibit covered two floors, a second intro show was developed around “The Wishing Cup.” As visitors gather at the entrance, they see projections before them but are unaware that physical objects are hiding behind the screens. Williams explains, “We used a translucent projection material that when projected on becomes opaque, so they don’t know what’s hiding there.” 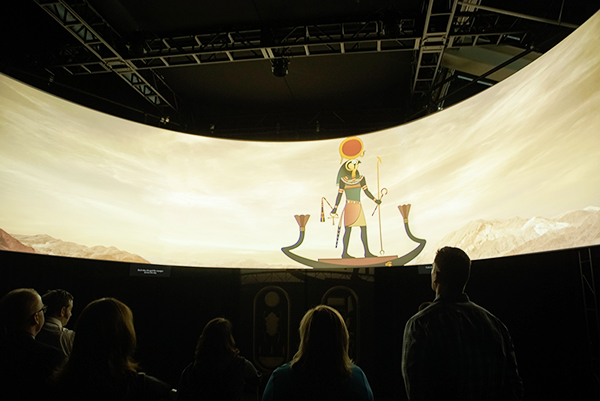 An audio narration explains the story of The Wishing Cup, then visitors hear sound effects as if a chisel is hitting stone. As it’s chiseled, the image falls away and the physical tomb behind it appears. Throughout this immersive experience, all the technology is hidden and used to highlight the history and artifacts, not the technology itself. This guiding principle continues with the exhibit’s use of projection mapping, which sees images projected onto complex 3D surfaces instead of flat screens – in this case the tops of gallery entry portals to create signage that blends into the exhibit.

Bringing Art to Life with Virtual and Augmented Reality

The Nelson-Atkins Museum of Art in Kansas City, Mo., has more than 35,000 works of art and welcomes 500,000 visitors a year. Like many museums, it’s exploring ways to use virtual and augmented reality to engage visitors and enhance their experience – while also using VR as a marketing tool to engage fans at home and encourage them to visit.

A few years ago, a donor gave Nelson-Atkins an extensive collection of impressionist paintings. While the museum was building the gallery to host them, it created a VR recording of the collection in the donor’s home so people could get a preview and be encouraged to visit the museum or become a patron – both of which provide ROI by driving revenue.

Virtual reality also lets people experience art in ways that isn’t possible in the physical world. For example, Nelson-Atkins worked with a local hospital to CAT scan a collection of miniature angels carved out of ivory. The scans were then converted to a 360-degree immersive video that allows guests to experience a more up-close and intimate view of the angels without any chance of damaging them. “They’ll be able to explore that in a completely different way than they would in reality,” says Doug Allen, the museum’s CIO.

For documentation purposes, Nelson-Atkins is also now recording 360-degree videos every time it renovates a gallery or sets up an exhibition. “It’s standard to photograph an exhibition, but [now] we’re also going to be taking 360-degree video,” said Allen. “So [the technology] has taken on this additional function of documentation that makes it easier. Let’s say 10 years from now, somebody wants to look back on how we had it set up, we’ll be able to put on the headset and understand it.”

Nelson-Atkins is also looking to use virtual reality (VR) headsets to help design partners ensure each exhibit has optimal spacing and traffic flow, in addition to integrating augmented reality (AR) features that overlay information on top of live images of the museum rooms, potentially offering guided tours and non-intrusive information.

We live in a digital world, and it is the only type of world that future generations will know. Realizing this, The LINQ casino in Las Vegas saw an opportunity during recent major renovations to introduce immersive digital art experiences that excite guests and elevate the casino in an extremely busy, competitive environment.

Entitled DATALAND, the one-of-a-kind digital art experience was designed and created by Turkish artist Refik Anadol. Anadol’s interactive art piece presents bright flowing 3D visuals in immersive digital spaces to create an intersection between digital and physical mediums that guests can walk through. Beginning outside the casino with a large rectangular LED display facing outward and an even larger LED display mounted on the ceiling above the entrance, the installation allows guests to journey into the art itself. Anadol claims DATALAND is one of the world’s largest and most interactive environmental art installations, including several ‘immersive zones’ where sensors detect guests’ movements and sounds and cause immediate changes to the on-screen visuals.

Spread throughout the hotel, the installation includes various LED sculptures and spaces, such as a hallway where the walls and ceiling form a single cohesive LED display surface. At a second entrance way, the entrance and several spaces behind it are completely wrapped in LED displays that present a single aesthetic, making the space feel like a living, breathing room. DATALAND has many distinct sections, including six interactive virtual reality bays where art gives way to entertainment as guests use their movements and sounds to become digital action heroes, professional boxers or outer space DJs.

Artists and those who support them have always experimented with the new tools and mediums of the day, leaving the world some of our most valued treasures. The age of digital art may be the first time that an average citizen, or whole groups of people, are becoming part of art exhibits themselves, where their actions and movements directly affect the environment around them. The engaging, exciting nature of being involved in a large, enveloping art experience appeals to all ages and demographics.

For artists, museums, public spaces and private businesses, the new wave of digital artists and the incredibly creative installations they can build are likely to be crucial to keeping the idea of art installations relevant to a population with increasingly short attention spans. By staying on top of the latest cutting-edge audiovisual technologies, artists and their commissioners will keep audiences engaged and returning to see what experience they’ll think of next.