6 Ways Artists Can Use Instagr..

An unlikely pairing, real estate entrepreneur Chester Perkowski and mixed media artist Rachel Thompson literally met on the street as neighbors and began a startup project that has gained traction out of the gate. Perkowski and Thompson are introducing a novel medium and are exploring its application in mosaics, sculpture and jewelry. “We are engaged in the co-creative process of metamorphosing discarded Styrofoam into an elevated art form,” they explain. Perkowski creates the material and Thompson formulates it into a cohesive expression of art and design. The unique alchemy of their alliance presents an innovative medium and aesthetic that also raises environmental awareness.

Rachel Thompson remembers when her neighbor Chester Perkowski brought her a small plastic bag of “unidentifiable baubles,” she says, laughing. “I just kind of rolled my eyes like ‘How am I going to finesse telling my neighbor that I am not interested in pursuing this art project with him?’ ” 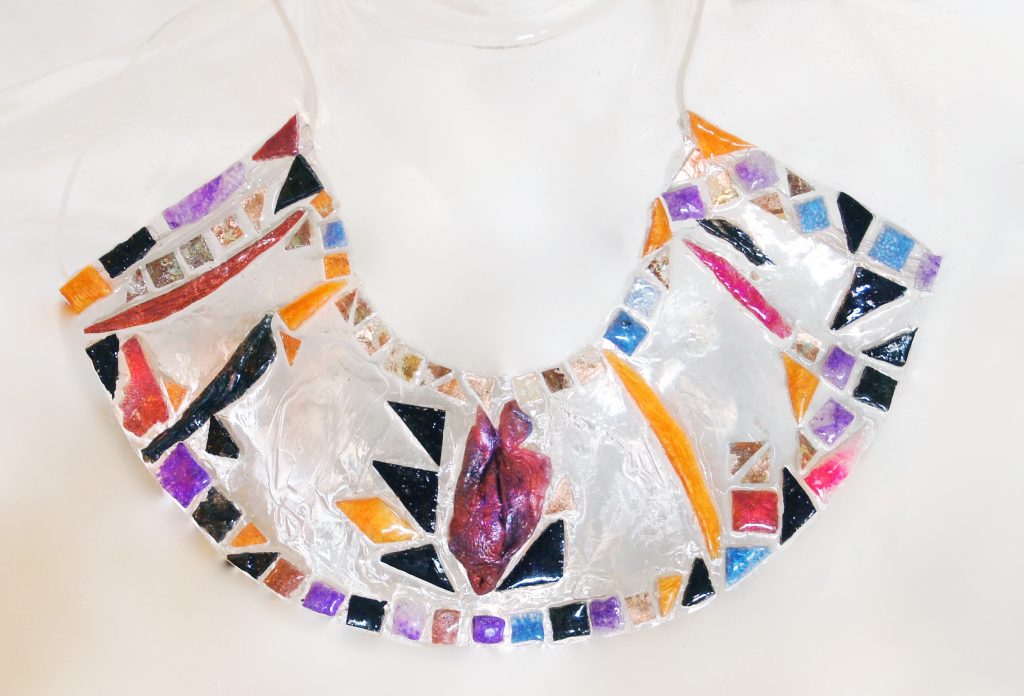 “From being neighbors, I knew Rachel was an artist,” Perkowski says. “I took a little bag of this stuff to her at one of her exhibits and said ‘Take a look at this.’ ”Perkowski imitates Thompson’s unenthusiastic response by making a low, grumbling, disgruntled sound.
Never mind that inauspicious first encounter. Thompson’s muse soon kicked in and within weeks she was creating pieces from Perkowski’s colorized, reconstituted polystyrene pieces. The result is what the two creative partners call the Recovery Collection, which includes modernist sculptures, mosaics and contemporary jewelry.

Perkowski is only now embracing his internal identity as an artist, although he did assist in advancing the careers of other artists such as sculptor Rod Fisher over the years. He earned a degree in English from Penn State and returned years later to earn a master’s in art education. He worked in video production for cable television advertising, then developed student housing properties and, after moving to Ormond Beach in the 1990s, developed assisted living facilities there.

Thompson was heretofore primarily an award winning mixed media painter with a background in interior design and spiritual studies. She studied with New York expressionist painter Mimi Schiff who was a student of Hans Hoffman and Charles Burchfield. She has shown in the Appleton Museum, Ocala, and was a recipient of the Gargiulo Art Foundation Artist of the Year Award in 2015. Thompson is also a former gallery owner and has shown in New York and Florida galleries. 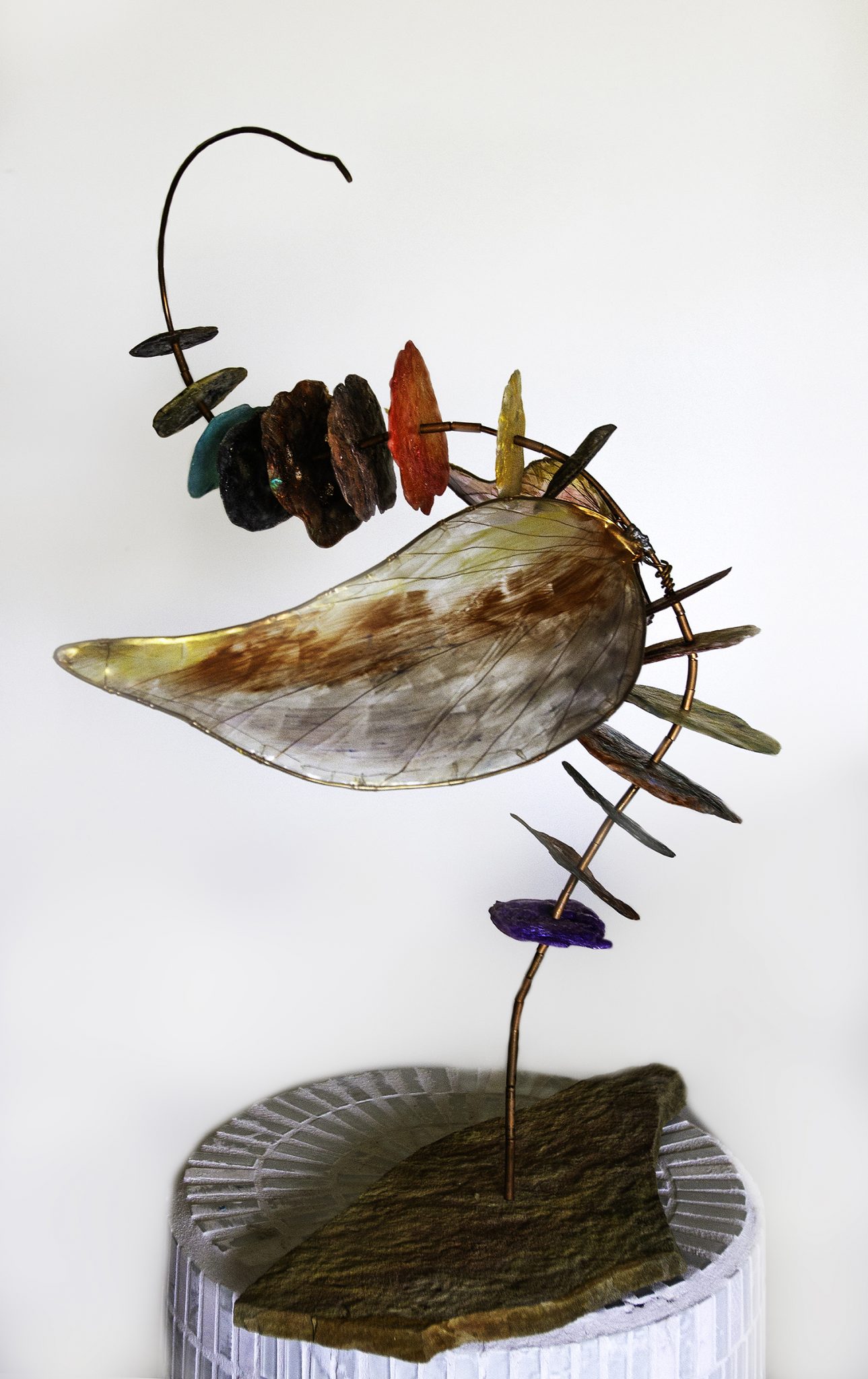 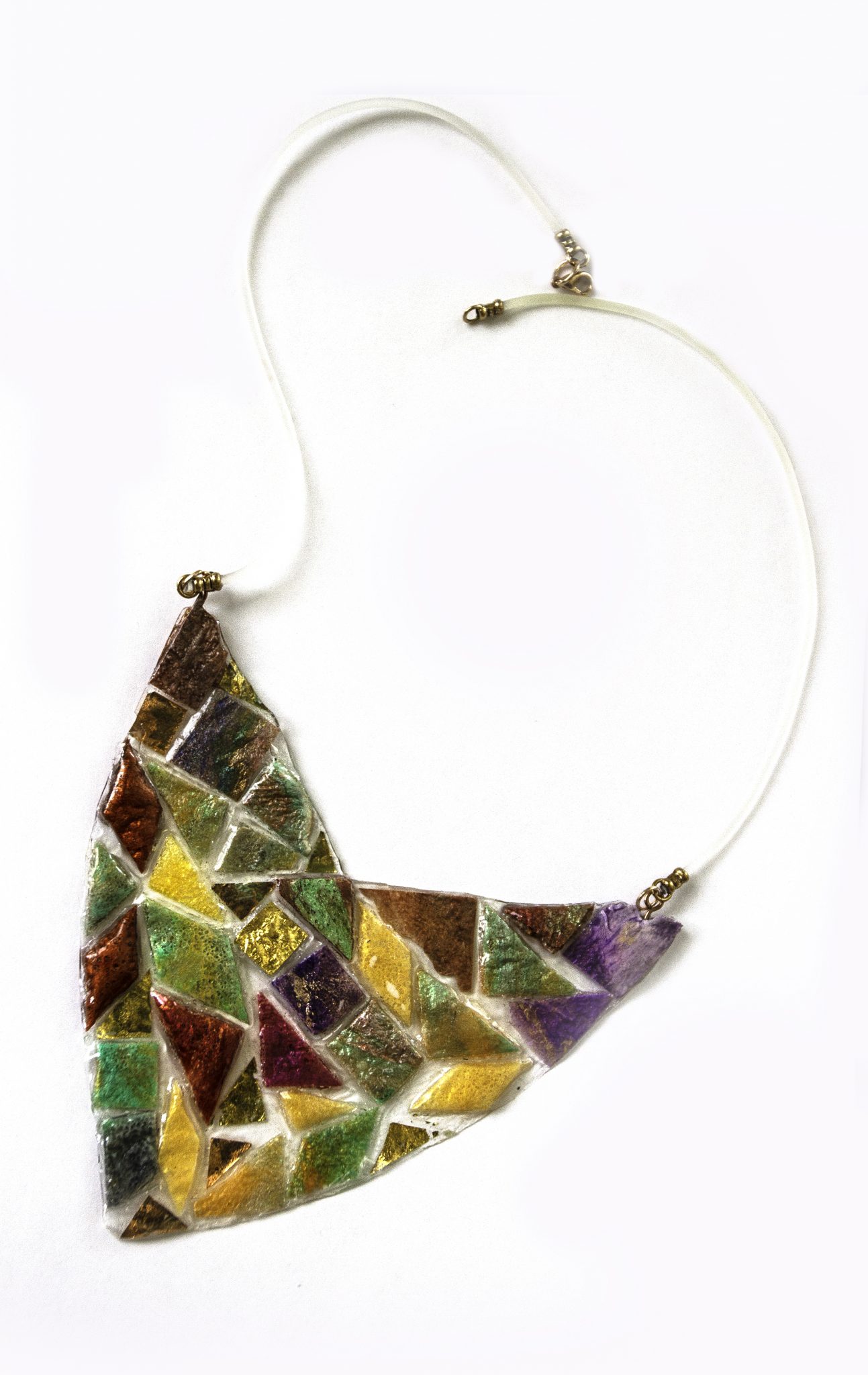 Thompson and Perkowski are both aware of the ecological aspects of repurposing polystyrene. On a grassroots level, Thompson notes that numerous friends, neighbors, and business owners are now transferring their foam cups and packing material to her and Perkowski. “People are starting to literally change their lifestyles,” she says. “We are elevating something to an art form that would otherwise be in the dump and can’t really be disposed of even once it’s in the dump.” According to environmental organizations, Americans throw away some 25 billion polystyrene foam cups annually, and those pieces can take at least 500 years or possibly longer to decompose in landfills. The technology to recycle polystyrene foam does exist, but the process is limited for various reasons. In Perkowski’s process, a piece of polystyrene foam about the size of a brick used in home building will yield two pieces each about the size of a quarter. “We’re not going to take all the polystyrene in the world and make jewelry and mosaics out of it,” Perkowski says. “But the story of it – the idea that you should be aware of waste and that this little jewelry piece, this set of earrings, this mosaic or sculpture represents consciousness of recycling – is going to go with each piece.”

In addition to the environmental aspect, Perkowski is motivated to take previously industrialized products and reinvent them through the artist’s studio and soul. After Thompson initially dismissed Perkowski’s bag of baubles, she “slowly began to study them in different lights, angles and applications,” she says. “I feel like these have taken on a very natural life even though they’re made out of a synthetic material. They look like stone, shells, figures, animals or tiles and exhibit properties of iridescence, texture, and translucence. Some of them stand alone as a piece of art. One piece looks like a dancing woman, like a dervish or a woman with a burka swirling. They have become fascinating animated entities, each with their own personality.”

As Perkowski continues delivering batches to Thompson she organizes and subdivides them according to color, shape and rarity. “Each piece is truly one-of-a-kind. The most unique ones are set apart into the ‘figures’ or ‘stand alone’ category.” Those will be used as centerpieces for original jewelry and references for paintings. Hence the alchemy!

Samples of the Recovery Collection are currently on display in Florida at Arts on Granada in Ormond Beach and Riverside Fine Arts Gallery in Daytona Beach as well as online at www.iamartrachel.com.

The Recovery Collection will also be on display at Spectrum Miami during Miami Art Week in the World Wide Art-Artavita Gallery booth, December 5 through 9, 2018. Offered during the show will be Recovery Collection’s award winning piece “Flight Artavita,” which is composed with Perkowski’s transmuted recovered polystyrene, copper and stone and is offered at $2,500.00.

See more from the unlikely duo at www.iamartrachel.com