Demystify the Business of Art .. 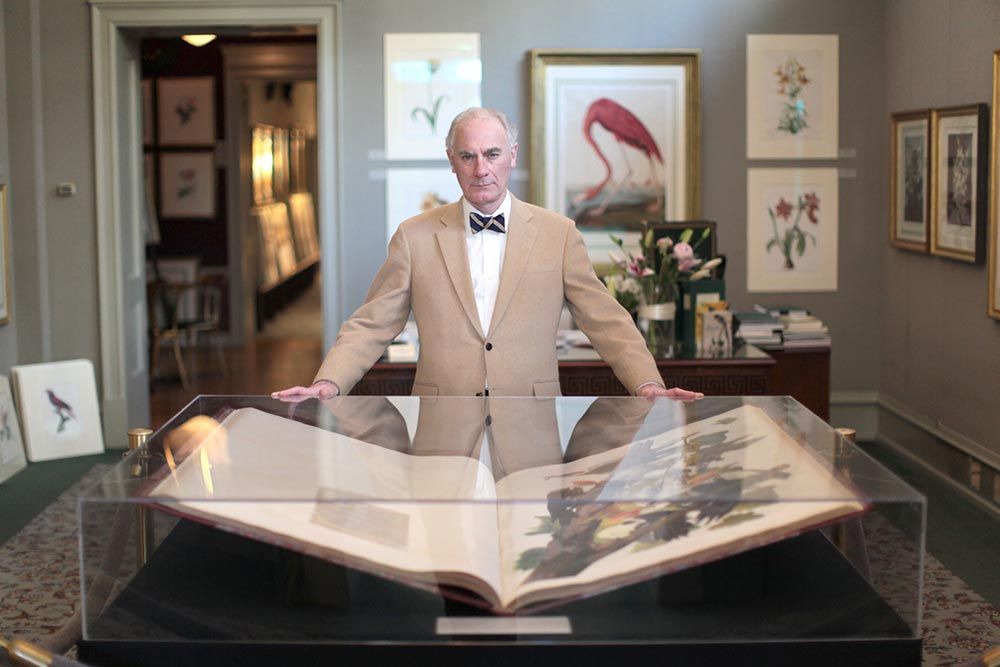 We were fascinated by the announcement of a complete book of hummingbird prints by celebrated naturalist John Gould. Not so much because of the subject matter, but because the book takes a step back in time, reflecting on the esteemed reputation of John Gould. We also wanted to know more about the Joel Oppenheimer Gallery. So we asked Joel and Laura to give us some insights. First a bit about them and the book:

Joel and Laura Oppenheimer both hold degrees in fine art from the School of the Art Institute of Chicago and are owners of fine art galleries in Chicago and Charleston, South Carolina, known internationally for the works of John James Audubon and many renowned natural history artists. They are also publishers of contemporary fine art prints, creating facsimile editions in partnership with museums in the United States and United Kingdom, including the New-York Historical Society, the Field Museum of Natural History, the American Museum of Natural History, and the Royal Botanic Gardens, Kew, England. One of the country’s foremost authorities on Audubon, Joel Oppenheimer is the author of The Birds of America: The Bien Chromolithographic Edition, edited by Laura Oppenheimer, published by W. W. Norton in 2013.

For Hummingbird lovers, bird watchers, and fans of natural history art, The Family of Hummingbirds: The Complete Prints of John Gould, published by Rizzoli Electa, is described as the definitive illustrated book on John Gould’s celebrated hummingbird folio. Gould, a renowned naturalist, is also known as the “British Audubon.” The book showcases 418 superbly detailed hand-colored lithographs of hummingbirds created in the mid-1800s, representing all the known species at that time.

In her essay for the book, Laura Oppenheimer tells the story of Gould’s colorful life and places his work in the context of a remarkable period when exploration and classification of the world’s natural wonders was at the forefront of scientific discovery and universally celebrated in Victorian popular culture. Joel Oppenheimer details how Gould created the prints and presents an overview of nineteenth-century printmaking and lithography techniques. He also unravels the mystery behind the gold-leaf process that Gould employed to portray the iridescent quality of the hummingbirds’ plumage, resolving a long-standing controversy regarding who should be credited for its invention. The Family of Hummingbirds will delight birdwatchers, fans of natural history art, and hummingbird lovers everywhere.

And then we pressed on with a few questions to give our readers a bit more insight about this interesting duo and their gallery:

1. When did you first become involved with art? And natural history fine art in particular?
We both graduated from the School of the Art Institute with degrees in fine art in the late 1970’s. So, our interest in art is deeply rooted. For Joel, his interest in art started, on a fairly serious level when he was eight years old. When it was time to go to college, the Art Institute was the only school he applied to. Fortunately, he was accepted and moved to Chicago when he was 18. From an early age, Laura was fascinated by design in the world around her, and the humanities in general. Her epiphany occurred when, after pursuing liberal arts study at Lake Forest College on a scholarship, she decided to make art my career and transferred to the School of the Art Institute of Chicago. And there is where we met. 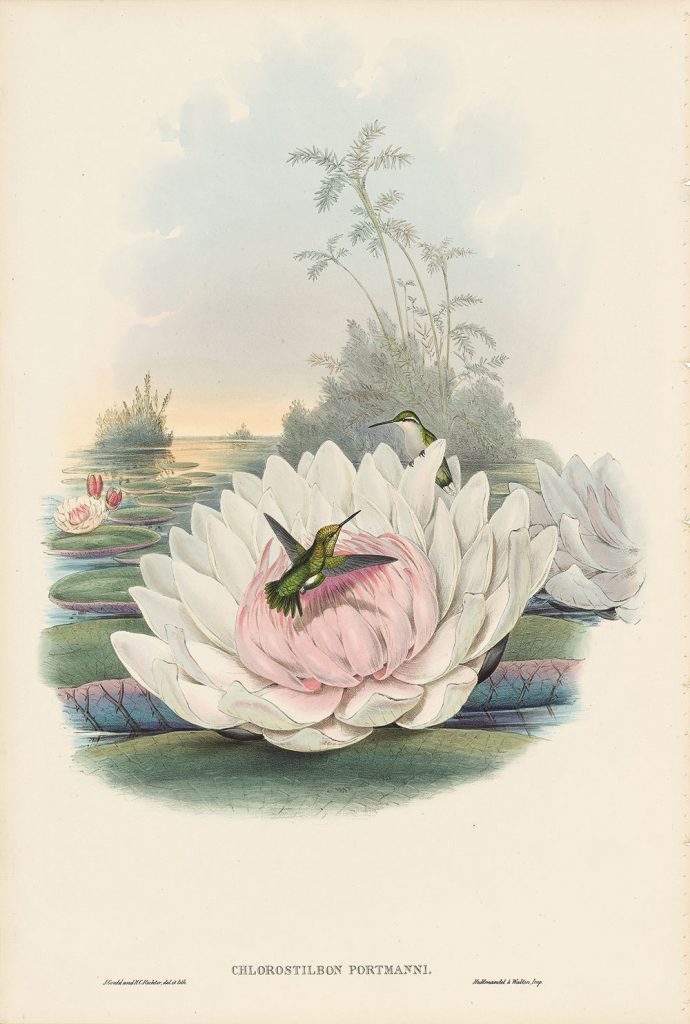 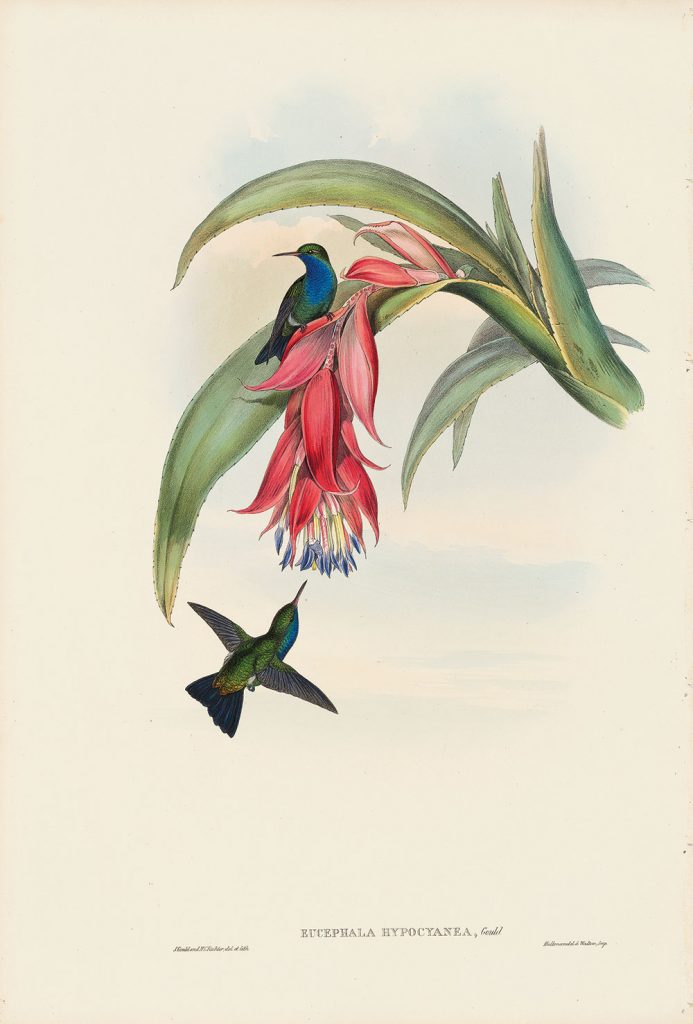 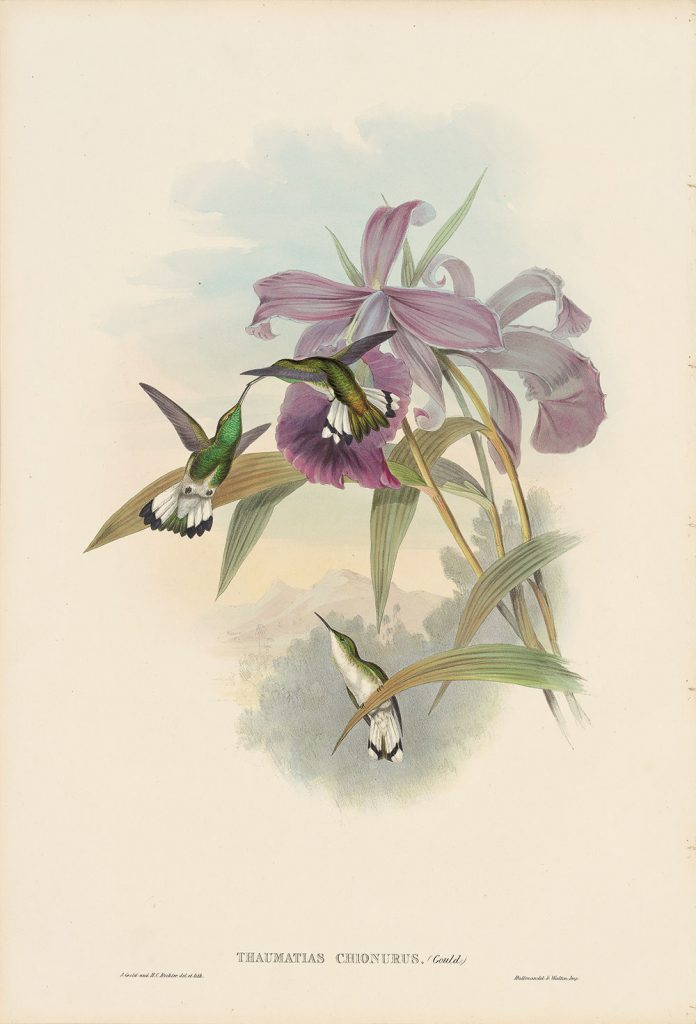 2. How and when did you your involvement lead you to collect hummingbird prints?
Our passion began with the works of John James Audubon, the famous 19th century artist of North American birds. Once we had established a reputation as dealers in his work, our scope expanded to natural history art as a genre. This, of course, included John Gould, sometimes called the British Audubon. Among the many works Gould created during his long career, the Family of Hummingbirds is among his best known and most popular. Consequently, over the years, we acquired a significant collection of those and other works. The book is based upon a complete collection of the Hummingbirds that we purchased several years ago.

3. What inspires the collection – where do your ideas of what and/or who to collect come from? As a naturalist, as a collector, as a gallery owner?
Our emphasis is on natural history from the perspective of the great images that were produced as a result of the age of exploration and scientific discovery of the natural world that proliferated during the 17th to 19th centuries. So, we focus on the exceptional artists whose works transcended the designation of scientific illustration and became works of fine art.

4. Why hummingbirds? And how did the book come about? What drew you to publish the collection?
Having previously authored a book about Audubon published by W.W. Norton in 2013 and working with other publishers as consultants and furnishing images for other authors books, we had connections with them. We had been talking with Rizolli about a potential book for a couple of years and when we acquired the John Gould complete hummingbird collection, it became an obvious choice for the new book.

5. Goals for the gallery and collection – today? For the future?
We have galleries in Chicago and Charleston, South Carolina. Our focus is on seeking high-quality inventory of original works, as well as expanding our publishing entity, Oppenheimer Editions, and working with museums in America and Great Britain to recreate exceptional facsimile prints from their collections. We are passionate about natural history art, and intend to continue offering superb examples of rare works by important natural history artists, including John Gould, J. Audubon, Mark Catesby, Alexander Wilson, Pierre-Joseph Redouté, Dr. Robert Thornton, Basilius Besler, Edward Lear, and others. 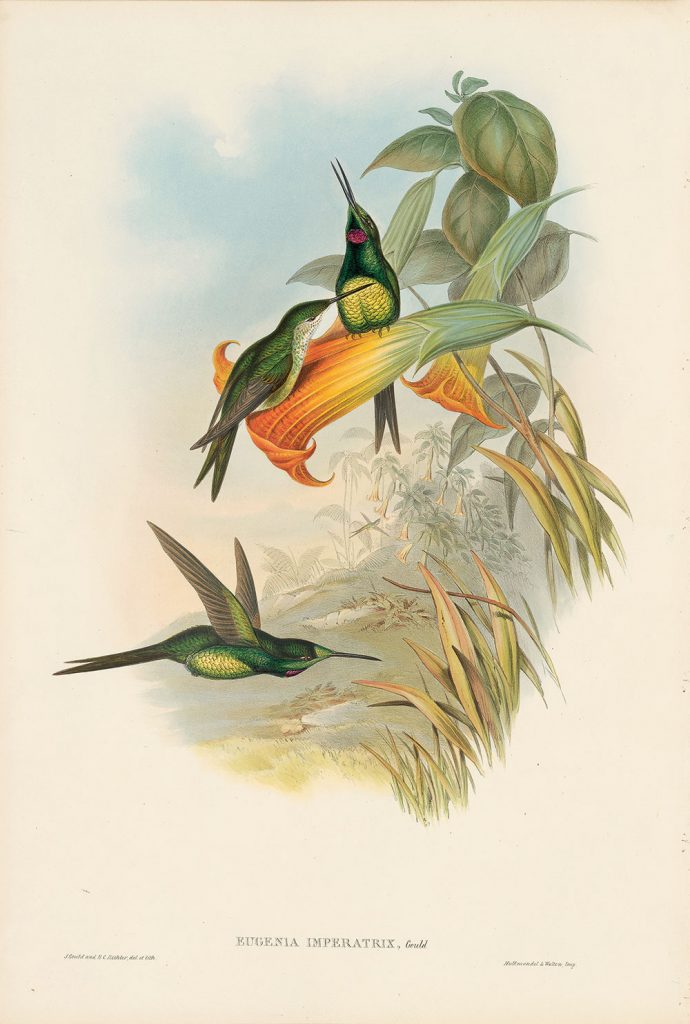 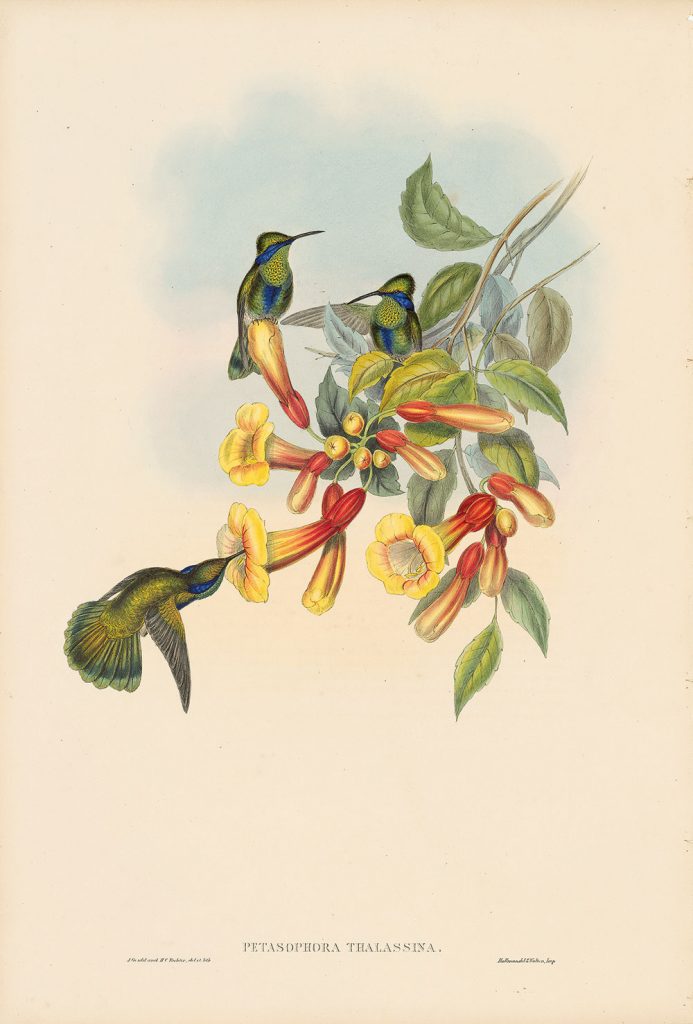 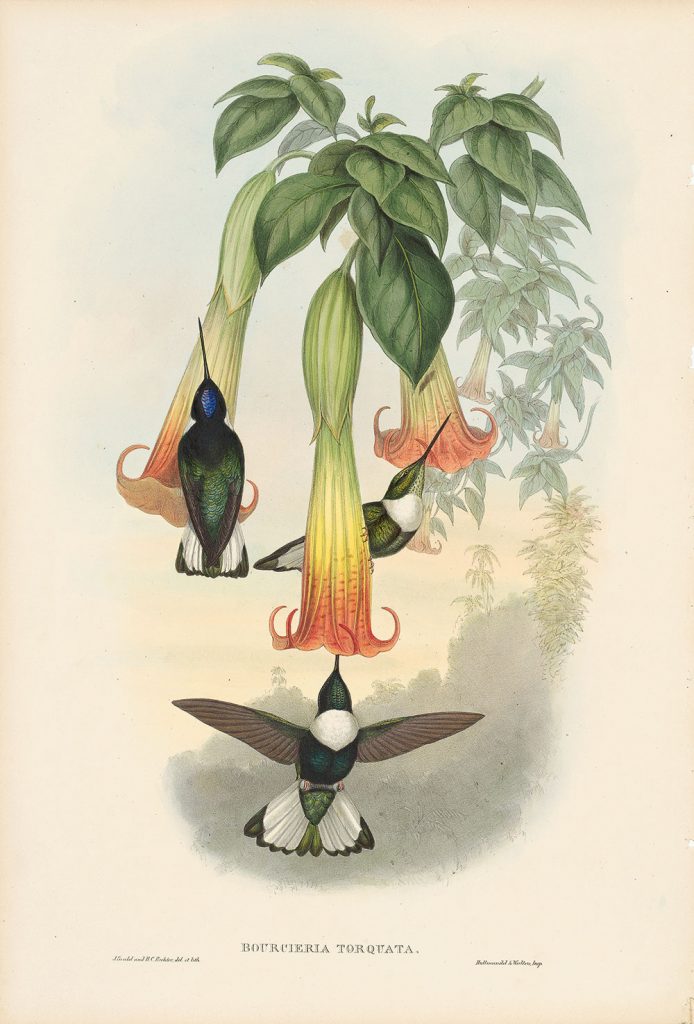