Creativity is the New Therapy 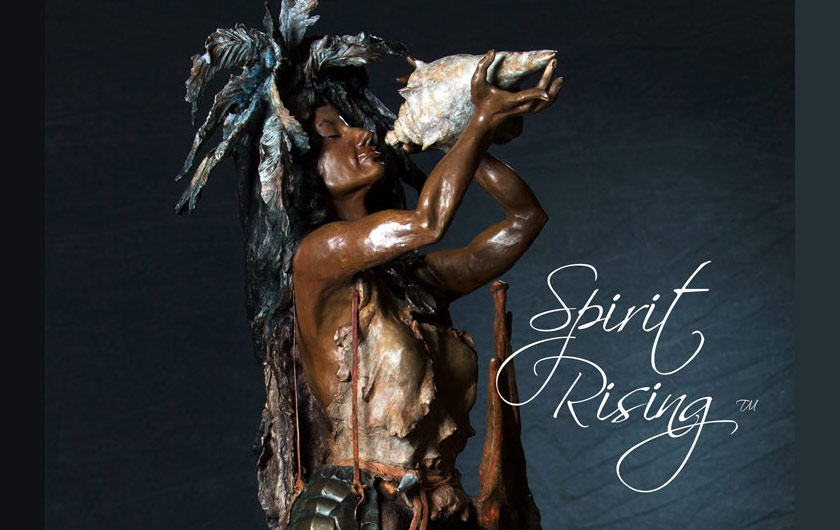 Artists inhale inspiration from a myriad of sources; the world is their template. For Marcella Rose, the initial inspiration behind creation of her four-foot bronze sculpture “Spirit Rising” came from a totally unexpected source: a young woman who died an estimated 20,000 years ago in what is now western Minnesota.

That young woman’s remains, located several feet below the soil surface, were inadvertently uncovered in June of 1931 just north of Pelican Rapids, Minnesota, during excavation for what is now U.S. Highway 59.

“Spirit presents itself in many ways,” Rose affirms. “I am a visionary, receiving images in my mind’s eye.” Her vision of what that ancient young woman may have looked like, adorned with the various artifacts with which she was found, culminated in “Spirit Rising.” The bronze sculpture’s first edition was unveiled in June of 2016 — 85 years after the fossilized skeleton’s Depression Era discovery.

Rose’s powerful, detailed sculpture depicts a young Paleo woman making music by blowing on the whelk shell, like the one found with the reamins, in complete harmony with a pelican by her side. “She is confident, strong, at peace — stepping forward into the unknown with complete faith and unabashed reverence for the world and life as she experienced it,” Rose observes. “She carries with her the elements of nature’s tools and medicines within her turtle pouch — all of which accompanied this young woman when she apparently drowned in what was Glacial Lake Pelican.”
From 1931 through 1968, the Glacial Age skeleton was actually referred to as “Minnesota Man.” Several years later, it was correctly renamed “Minnesota Woman.” While there remains some uncertainty and controversy as to the skeleton’s actual age, it’s apparent she is among the oldest, if not the oldes, human remains found to date in North America. The Glacial Minnesota Woman Organization, dedicated to increasing knowledge and expanding awareness of Minnesota Woman, bestowed upon her the name “Nimuué,” or “Lady of the Lake.”

“‘Spirit Rising’ represents the image I saw upon learning the story behind Minnesota Woman,” Rose explains. “As her spirit flowed through me, I received a clear message of resurgence. It was one of awakening, of embracing our inherent intuition, cooperation and sustainability. In my mind, she was instinctively wise, older than her earthly years, given the harsh reality of her habitat. I see her as a reminder of authentic beauty and balance — a monument to help us further open our hearts and minds, to be reminded of who we are and from where we came.”

Rose’s bronze sculpture was preceded by her creation of a richly colored oil painting, giving artistic expression to the young woman who lived near her home so long ago. That in turn led to the visualization of “Spirit Rising.” She drew numerous thumbnail sketches, “turning the composition around in my mind, knowing the piece would be viewed from all angles.” Once she settled upon the sculpture’s form and components, Rose built an armature of pipes and aluminum wire to support the heavy clay she would use to sculpt “Spirit Rising.” Months of building and sculpting in her studio ensued as she birthed and refined the clay model.

Upon completion, the complicated piece was cut apart for transport to Moeller Bronze of Hankinson, North Dakota There, owner Jonathan Moeller and his team made 30 molds, created wax impressions, prepared ceramic molds, and melted and poured the molten bronze. They then welded the 30 pieces together and chased the sculpture. Rose performed the patina process prior to waxing and polishing. “The entire experience truly was one of giving birth through my soul, over and over,” she says. “Every step was infused with a great deal of passion.”
Ironically, the Moeller Bronze foundry is located in close proximity to the northeastern South Dakota burial site where Minnesota Woman’s remains were repatriated in 1999 under auspices of the Native American Graves Protection and Repatriation Act. In another intriguing irony, heavy rains have fallen at key moments: First, although drought conditions reigned during the early 1930s in western Minnesota — to the point where Prairie Lake, next to where the skeletal remains were found, was actually tilled and crops planted — it rained profusely in the days following her discovery in 1931. Then, just as Rose’s bronze sculpture was being unloaded at her studio by Moeller Bronze in 2016, a downpour occurred. And a few weeks later, during its unveiling in a Pelican Rapids park, the program was interrupted by another intense rain. “In my mind, there’s nothing coincidental about those events,” Rose emphasizes. “She was, after all, covered by water and ice for such a long time — and she is ‘Lady of the Lake.’“

“Spirit Rising” 1/10 resides in Rose Gallery in downtown Pelican Rapids, on permanent loan to the community. “Spirit Rising” 2/10 is presently displayed at and being marketed through the Grande Gallery at the Galleria in Edina, Minn., a suburb of Minneapolis. “Spirit Rising “ 2/10 also was featured in Rose’s booth at Art Santa Fe 2018 in mid-July.

Questions regarding “Spirit Rising” or other Marcella Rose sculptures and paintings are welcomed at marcella@marcellarose.com.

To read more about the Minnesota Woman:
http://forgottenminnesota.com/2016/10/prehistoric-minnesota-woman