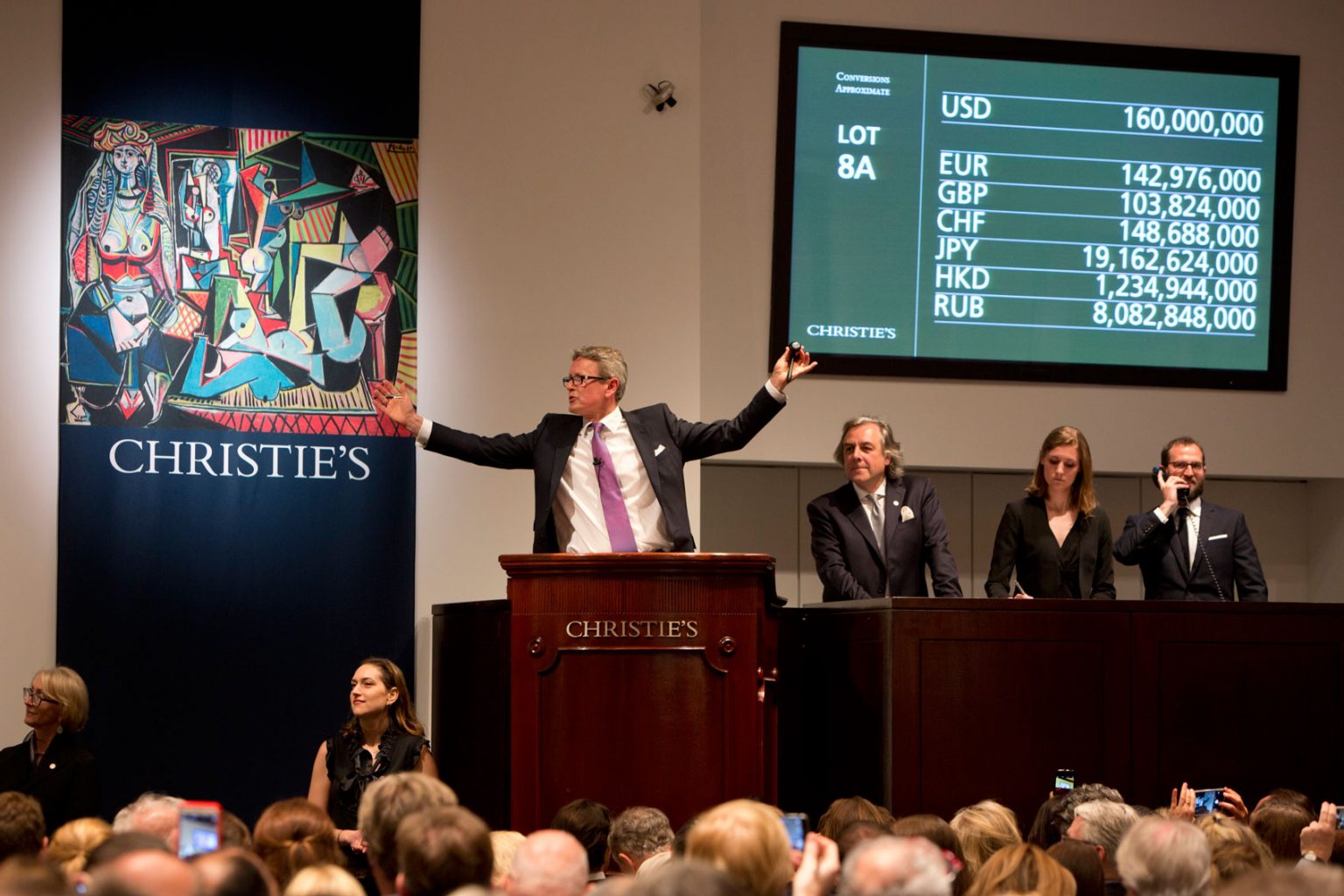 As the art world continues to move out of recession, auction houses zoom

An auction, especially one with a high profile, is more than a sale of art; it’s an event. In contrast to the gallery system—which may hold little consequence to anyone but the individual buyer and seller—an auction draws in hundreds or even thousands of interested people.

An auction is like a horse race or a boxing match. Sometimes, it’s even like two gladiators fighting to their (financial) death. It has winners, and it has losers. It has upsets and can sometimes turn the art world on its head in just a few short minutes.

Beyond the great pomp and 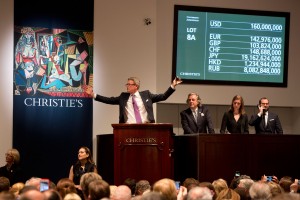 circumstance, an auction system plays many other important roles within the art world. One of the main reasons for the auction system’s importance is its public nature; sales within the gallery system remain more private. Although some sellers and purchasers may prefer to operate with a degree of anonymity, the final auction prices become public knowledge.

For this reason, the buying and selling of fine art through auction has a large influence on the overall pricing and value of art. Gallery owners and perspective buyers use this collected data from all of the auction houses as something of a Blue Book for art. Thus, the auction system is valuable as a reference in charting artists’ value in the past, current selling prices, and future worth.

Such public valuing of items helps to steady an industry that could otherwise be a fickle beast. After all, the market is driven by the supply and demand of products whose values are determined largely by perception. Auctions play a major role in solidifying that perception. Scholarly work published in auction catalogs further establishes the value of art and the status of the auction houses themselves.

One auction can sell hundreds of items and rack up millions of dollars in sales in an afternoon. An auction can even change the direction of the art world. 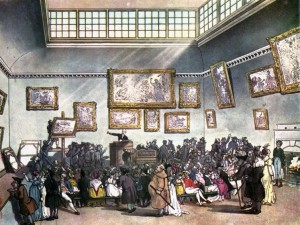 Auctions Before and After the Recession

Even in the best of times, the art industry can be a chaotic place, and the recent recession had extreme consequences for sellers and buyers. However, most agree that the recession is largely a thing of the past now, so we are able to look back on it with a bit of perspective.

The ups and downs of the economy have tremendously affected auctions. Unlike gallery sales, which predictably follow economic swings, auction sales have experienced many interesting twists in recent years.

“Pre-recession, we found that buyers had more confidence to spend money,” says Laura King Pfaff, chairman of Bonhams Auctions, which has houses in London, New York, San Francisco, Hong Kong, and Los Angeles and conducts about 400 auctions each year. “Post-recession buyers are typically more cautious with spending overall. Even the well-heeled are looking for good value, and we have seen an emergence of more art advisors to act as a client’s agent.”

Despite this climate, various sales records have recently been smashed. In May, Pablo Picasso’s “Les Femmes d’Alger (Version ‘O’)” sold for $179.4 million, breaking the record for the highest price ever paid for a piece of artwork at auction. At the same auction, Alberto Giacometti’s “L’homme au doigt” broke the record for the most paid for a piece of sculpture at auction, garnering $141.3 million.

“There are always exceptions to the rule,” explains Pfaff. “Individuals who have money will spend money, but the overall mood is still somewhat cautionary. It also makes a difference with what is being offered. If a very rare piece of art comes to auction that has not been seen in the public for years, there will most likely be a bidding frenzy, causing the prices to soar.”

Although consignment of art has remained mostly consistent despite the varying economy, the reasons for such consignments have varied, she says. “Pre-recession consignors hoped to get higher than fair-market prices for their art. Post-recession consignors were hoping to liquidate for fast cash. This has reverted back since the return to a healthier economy.”

Jennifer Ferguson is the director of corporate affairs with Christie’s, the world leader in art sales across many auction categories, with houses all over the globe. “Looking at our annual global sales figures from 2005 forward, you can see that the global recession led to a brief slowdown in auction sales in 2008 and 2009 [a low of $3.3 billion, after a previous high of $6.3 billion], followed by a dramatic recovery and growth trajectory,” she says.

Earlier this year, Christie’s issued a press release stating that the company reached a record $8.4 billion in sales, an increase of 17 percent, in 2014. That year-end tally was the highest total for Christie’s or any art company in the history of the market. A further breakdown of that number states that auction sales accounted for $6.8 billion.

“In general, the growth we’re seeing in recent years is a result of more buyers entering the market [globally] and creating greater demand, which leads to increasing prices,” says Ferguson. This year, Christie’s sales to buyers from Europe and the Middle East are up 20 percent.

Nicholas Lowry, the president and principal auctioneer of Swann Auction Galleries in Manhattan, has a different take on the effect of the recession. “What the recession did was shake the tree loose of all buyers who were in it primarily for fun. The market now is much more focused on prime pieces and marquee names that are in superb condition,” he says. Due to this mindset in the auction marketplace, Lowry says, it is now easier to sell a $10,000 piece of art than a $1,000 piece. 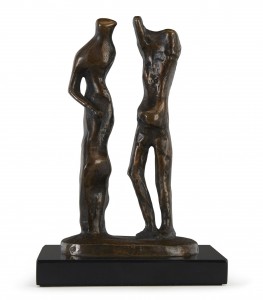 This Henry Moore sculpture “Standing Man and Woman,” was part of film star Lauren Bacall’s art collection and sold for $56,250 at her estate auction earlier this year.

These statistics might lead one to wonder whether only the super-rich are buying and whether buyers are focusing on the safer blue-chip art and avoiding more speculative purchases.

“It is getting easier to argue the enormous sums fetched at auctions are not entirely based on artistic merit but rather on some speculative dream,” Lowry adds. “While these high-profile auctions are the most visible aspect of our market, they actually represent a mere fraction of a percent of the auction market as a whole.”

Adam Hutter, founder of Hutter Auction Galleries, comes to the auction industry with his own unique perspective. “After years in the industry, I started my own auction house in the heart of the recession. This forced me to adapt to a new way of doing business. More aggressive marketing and personal services have become much more important.”

Hutter focuses on affordable art that everyone can buy. “In my market, there’s no longer a bread-and-butter area with sure-to-sell sectors. I do find people are willing to take more risks—dealers and privates alike. They’re taking chances on design styles and unknown artists, too, but mostly just on mid-century items.” 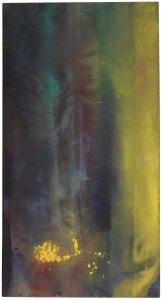 As one might expect, the larger houses have different priorities. At Bonhams, Pfaff says, Asian, American, and California art is consistently strong, whereas contemporary and Impressionist art manages to attract some big-time buyers.

Big names and works in good condition are always popular and safe choices. “We just sold the estate of Lauren Bacall in New York on March 31 and April 1, 2015. It was a ‘white-glove’ sale, which means it was 100 percent sold,” Pfaff says.

“The category that has seen the most dramatic growth, especially since 2010, is postwar and contemporary art,” says Ferguson of Christie’s. “That said, we are seeing masterpieces of all categories increasing in price, as more buyers compete for the best and most rare examples. Collectors in the top tier of the market tend to gravitate to well-known artists.”

“Masterpieces in any category are the most sought after. We advise clients to collect those artists and categories they love and want to live with. There are more and more statistical analyses out there that track various artists’ resale value, but nothing is guaranteed,” says Ferguson.

“As the auction world grows and changes, we’re seeing an increase in the diversity of our clients,” says Swann Galleries’ Lowry. “The availability of online tools for buying means that younger collectors operate more independently now, discovering and researching on their own. However, at Swann, we’re finding that, while more clients first discover their passions online, there is still a real desire on the part of collectors to connect with our specialists.”

Bonhams is increasing awareness outside its salesrooms through regional representatives, onsite and offsite appraisal events, event sponsorships, trust and estate appraisals, and conferences. “Relationships with museums are also important, as they are constantly looking to deaccession artwork to either raise money or tweak their collections,” says Lowry.

“The auction market has evolved over the past few decades from a dealer focus to a consumer focus, so we now see just as many private individuals in the salesroom as dealers,” says Ferguson. “Further, we are seeing steady growth in online participants in our live auctions, as well as new bidders in our online-only auctions.

Online sales for Christie’s reached $35.1 million in 2014, up 60 percent from the year before. The company’s digital access and geographic activities helped increase their audience, as well: New buyers were up 30 percent in 2014.

Hutter has also been reaching out for new customers. “We now have an international audience that we did not have before,” he says. “The Internet has placed us in line with everyone else as far as exposure. So when we have an important piece, it doesn’t go undiscovered. It used to be easy to buy at a mid-range auction like ours and flip it at the major houses, but no more. The savvy dealers and collectors scour the net for places like ours to find diamonds in the rough. But so does everyone else.”

Where Does It Go from Here?

There is little question that the auction market is on a strong upward path. This is certainly true with the large established juggernauts of the industry, such as Christie’s and Bonhams. But even the smaller houses are finding their way.

What is more of a question, perhaps, is what the modern auction house will be like in the next generation. With the addition of online tools and even online-only auctions, will tomorrow’s events take place with a million flat screens and Skype connections?

And what of the items for sale? What markets will rise, and which of the former staple sectors will disappear? Swann Galleries’ Lowry says, “With more auctions taking place now—brick-and-mortar, online, and combinations [thereof]—more items are coming to market. With that comes the inevitable scarcity of quality items. Although it hasn’t obviously happened just yet, it seems natural that, at some point, items will begin appearing at auction which no one would have ever considered as collectable or even auctionable.

Lowry even suggested that perhaps sneakers could become an auctionable item in the future, along with other items we consider to be ordinary. “The people at Kohler would have us believe that, one day, their faucets might be considered works of art.”