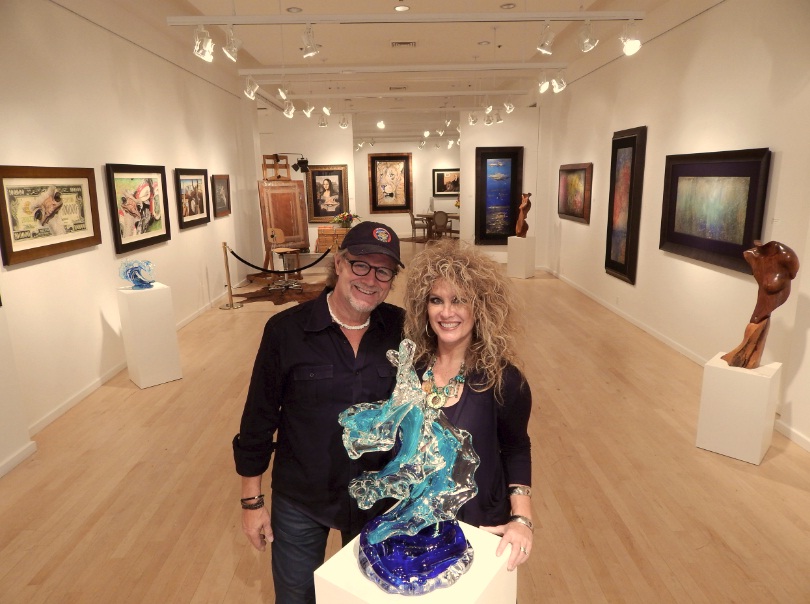 Lisa and D. Arthur Wilson, owners of the original Art Gone Wild Gallery in Key West, Fla., and the new sister gallery in Santa Fe, N.M., find themselves living a charmed life in the art world; however, their success did not always comes easily.

The husband-and-wife team is making some brave and risky moves, such as opening a new gallery during the tough economic recovery of 2010. Those risks paid off: The Wilsons are doing well enough to expand, and Lisa and Arthur’s work continues to attract more collectors. The couple is even speaking with some Hollywood producers about creating a feature-length animated film based on Arthur’s signature character, Rhupert the ostrich, although the pair cannot yet share any further details.

ABN spoke with the couple to find out what drew them to art and to each other and to discover the secrets of their success as artists and gallery owners.

Art Business News: How did you first get involved in art?

Arthur: My first art show was in 1976 in Dayton, Ohio, when I was 17. In the ’70s and early ’80s, mall art shows were [among] the major ways to make a living. When I tell people today that weren’t around in that era, they go, “What? In malls?” But you must understand that malls were the new marketplace. Downtowns were dying across America at the time, people had not yet started renovating downtown historic districts, … the shopping mall was brand new and promoters were doing art shows there. They were typically traveling shows, and I ran into one, and these people were making a living at art and traveling the country. I said, “Hey, it doesn’t get any better than that,” so I bought myself a van, and I started doing art shows coast to coast for the next four or five years.

ABN: What about you, Lisa?

Lisa: My mother was an amazing vocal-music educator, and she gave me that beautiful balance of always having a creative space. I was always surrounded by art and performances and museums, and I was a vocal-music major and dance minor in college.

But when Arthur and I met, I really hadn’t thought too much about being a professional two-dimensional artist. We got married, and I thought, “Well, I’ll just work for him.” But, as an artistic soul, he recognized that I was getting incredibly restless not having my own expression, so he encouraged me to start playing with different mediums. I started with—this is hilarious—large acrylic fruits and vegetables in my own style, and God only knows why they sold. I swear I don’t know why anyone gave me money, but they did. I think it was because they were big and cheap.

ABN: How did you meet?

A: At an art show in Boulder, Colo. I had my son with me, and I was recently divorced, and I was like, “Well, I’m not going to hit on any girls, not with my son around.” And [Lisa] was done with men. She was going through a divorce herself. So neither of us was looking. In fact, we were both intentionally not looking. But she walked by me, and I thought, “This gal is really pretty.” I complimented her, and she discounted my compliment, like women typically do. The next day, I walked into her booth, and I said, “Hi, my name is Arthur,” and I put out my hand, and that was it. We married a year to the date later, and it’s been 13 magical years.

L: When I met him, it was true, we both were not looking. And I’ll tell you what: He swept me completely off my feet. … It’s been a rollicking, hilarious journey ever since, and we really adore each other.

ABN: Arthur, how did you get into painting wildlife?

A: Wildlife was actually an early love of mine. I grew up always on an adventure as a kid, exploring the woods. 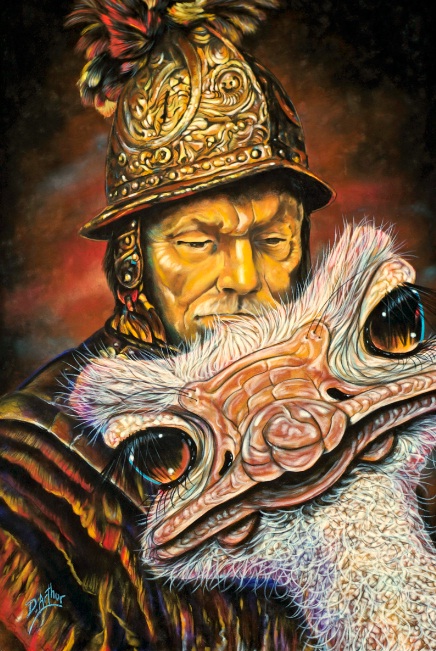 ABN: Tell me a little bit about the character, Rhupert, who appears in a lot of your work.

A: Rhupert the ostrich was born out of my wildlife work. At first, Rhupert started off a little bit slow, but he is now 90 percent of what I sell and 75 percent of what the Key West gallery sells. He’s very, very popular. My most expensive pieces I’ve ever sold have been Rhupert, and he’s also the most fun thing I’ve ever done.

Rhupert can be easily dismissed as just whimsical art or cute art, but there’s actually a great deal of depth to him. He’s balanced with a sense of humor. I’ve found that, almost no matter how serious something may seem, if I balance it with a sense of humor, it makes things digestible. Rhupert [represents] being yourself. That’s the boiled-down version: Be yourself. My favorite quote from Rhupert— Rhupert gets attributed with all these quotes—is about the three hardest things to do in life. First of all, to find out who you are. That’s not easy, and that’s the beginning of the journey. The next hardest thing above that is to actually be who you are, and that takes a certain amount of commitment and courage. And the hardest thing in life is to share who you are, and that is downright terrifying for most of us. Rhupert is kind of a Forrest Gump meets Obi-Wan Kenobi; he’s a wise Jedi master, but he doesn’t have a clue at the same time.

ABN: Lisa, what kind of work are you creating these days?

L: My current style is one that I literally developed just by playing, which is the guidance that my husband gave me. When I go to canvas, that’s what I do. I say a little prayer over it, and then I just give myself permission to play and not take myself so seriously and just see what we have here. I started out on board with acrylic mixed media, and … now I’m working on acrylic as my canvas, so I’m getting this crazy dimension to the work that is really a combination of two separate paintings.

ABN: If you had to give a thesis for your gallery, what would it be?

A: I like to say it’s “where art goes on adventure.” And I believe that life’s an adventure. My wife’s and my work are so radically different, but, still, going on that abstract-expressionist trail is quite an adventure. And that’s an adventure of the heart; she truly paints what she feels, and I marvel at how she can translate those emotions by the colors of paint she uses and the movement that’s created. For me, personally, “adventure” is one of the greatest words there is when it comes to describing life. It incorporates it all: the challenges, the difficulties, the highs, the lows. Art is an expression of that and can take people on that adventure if they allow themselves to open themselves up to it.

L: The thesis statement of our gallery would be: “It’s a safe place to find yourself and connect with yourself.” We think it’s quite beautiful, but the art on the wall is so unique. It’s not art that creates a shock; it’s art that creates an eyebrow raise. Especially with the Rhupert work: … “Why the heck is there an ostrich in everything?” That makes people laugh at first, but then, once they get to know what Rhupert’s message is, they begin to connect with the poignancy of D. Arthur’s message. It’s just a safe place to discover yourself—a safe place to learn something you might not have known. 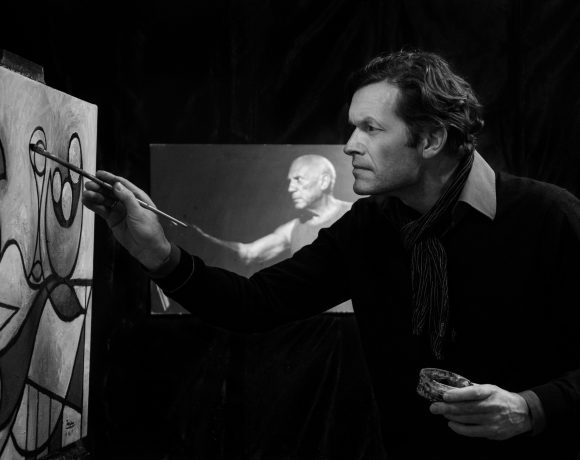 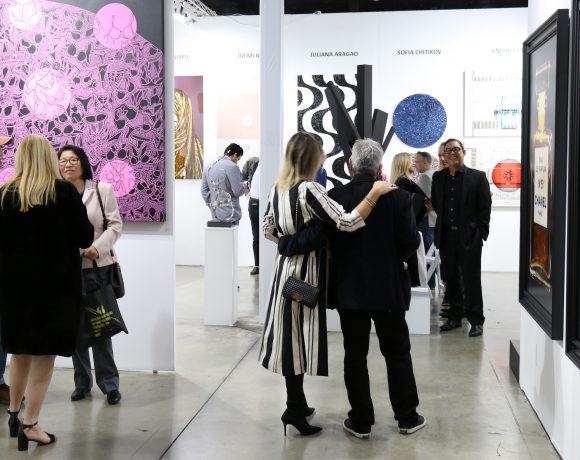 What it Means to Sell to the Trade 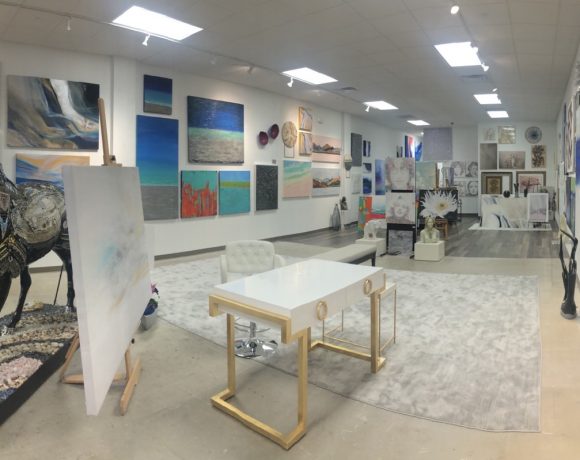