Meg on Marketing: What's Your .. 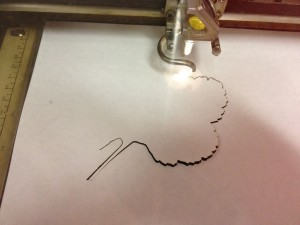 When Lisa Crabtree requested a mat cutter for Christmas some years ago, she had no idea the simple gift would lead to a dramatic upheaval in her life.

A longtime information technology specialist in the Houston area, Crabtree had installed software for companies throughout the world for nearly 25 years. Armed with this new tool, however, she began spending her free time on new projects, working in software by day and experimenting with custom picture framing by night.

What started as a hobby soon became a passionate interest, and by March 2006, Crabtree was in the framing business.

Crabtree worked from home for more than a year before opening Frames of Distinction in Spring, Texas. By 2007, interest in her skills had grown to the point that Crabtree could leave her day job. With her frame shop occupying her full attention, Crabtree was able to continue perfecting the skills she is so well known for in the Houston area: custom framing and engraving.

Today, custom framing comprises the majority of Crabtree’s business. With the local community as her primary market, she works with holiday and celebratory gifts as well as memorabilia, awards and certificates.

But, Crabtree’s work oftentimes does not stop there, as her shop offers a unique means to add a finishing touch: laser engraving. With this incredibly versatile technique, Crabtree can engrave nearly any material, from marble and glass to leather and wood, with inscriptions, symbols and even images.

Laser engraving opens the door to a myriad of options, but as Crabtree has observed, a little laser can go a long way.

There’s so much diversity to the service. You don’t have to do a whole lot to it’s just something very subtle, she says.

Sometimes subtlety is a necessity, as early summer’s flood of graduation and wedding gifts often call for simple, restrained elegance in the form of inscribed plaques and photographs.

Requests for laser engraving and framing are not limited to the expected annual holidays and events, though. On more than one occasion, creative customers have asked Crabtree to add her special touch to a number of unexpected objects.

When super slugger and second baseman of the Houston Astros Craig Biggio got his 3,000th hit in 2008, two of his teammates sprang for a special gift with local flavor. 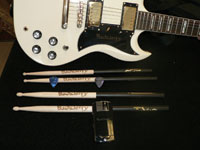 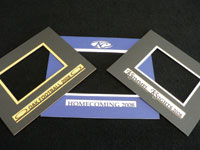 They went to a gun shop in the Houston area and bought him an incredibly beautiful shotgun and brought it to my store to be engraved, Crabtree says. We did it in cooperation with the gunsmith.

Buckcherry was doing a benefit for breast cancer, and they were donating engraved guitars for the cause, she says. They were definitely some of my more interesting clients.

In addition to rock stars, Crabtree’s client list has included industrial manufacturers who require laser markings on their stainless steel and anodized aluminum products. She has found, though, that familiarity with these materials can cross over to everyday consumers as well. For instance, on more than one occasion, Crabtree has engraved personal laptops with names.

Marble engravings are another one of Crabtree’s increasingly popular specialties. We engrave photographs on marble—something I love doing, she says. They turn out beautifully, and people really appreciate it.

Crabtree finds the effect of marble images particularly complements old photographs and mementos. In one instance, the engraved marble was as much an act of preservation as a tribute.

I once did an engraved photograph for parents of a police officer who was killed in the line of duty, Crabtree says.

Apart from these types of special, individual requests, Crabtree embraces charitable causes, as she’s contributed engraved items to raffles in the past.

Still, Crabtree enjoys the standard requests. One of her favorite projects in recent months has been commemorative items for local football and baseball teams. Because the items are made of wood and plastic, they have proven easier to work with.

Unusual materials have their downsides, Crabtree says. There are things that you get one shot at. We do a lot of guns—maybe because we’re in Texas. Glass is the same way because it’s fairly unpredictable.

Silicone wristbands from cyclist Lance Armstrong’s LIVESTRONG phenomenon were another unique material to grace Crabtree’s shop. In the end, though, they proved to be more effort than they were worth.

You can engrave them, but for the amount of time you spend on them, they really don’t make any money, Crabtree says.

A laser-cut mat example to advertise to other frameshops.

As Crabtree has expanded her offerings, she has learned to think critically about her materials and methods.

You have to think about the return on your investment, she says. I’ve done a lot of things that I thought were a great idea, but they turned out to be fruitless. Because the work itself is fairly time-consuming and expensive, you have to know what you’re getting into.

For Crabtree, familiarity with technology has been crucial to her success. When you’re starting out, you have to be good with computers, she says. You’re going to make mistakes, and knowing the system really helps.

Since she entered the custom framing world in 2006, Crabtree has done a number of things to publicize her services. Not all frame shops offer laser engraving, which means other framers are as much a part of Crabtree’s market as the individuals and organizations of the Houston area.

When advertising to frame shops, I make samples of engraved glass and matboards and just give them out, she says. I look at other custom frame shops as colleagues—people I can collaborate with. 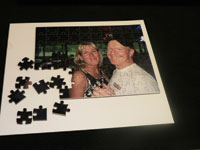 There is no question that Crabtree’s unique laser engraving offerings have garnered a reputation. Although the majority of her custom-framing clients come from her local community of Spring, Texas, her engraving services bring customers from 35 to 40 miles away.

Ultimately, it really helps to have diversity in your offerings, she says.

Despite hard economic times, Crabtree’s business has had its share of successes. The framing requests have gone down, but the engraving has increased recently, she says. Last year, I was incredibly busy around Valentine’s Day, and framing was my big summer market. This year, I’ve had a rush of business for graduation, Mother’s Day and weddings.

Maintaining her unique services will benefit Crabtree, particularly if consumers continue to cut back on luxury purchases.

In this business, Crabtree says, it’s that little extra that goes a long way.