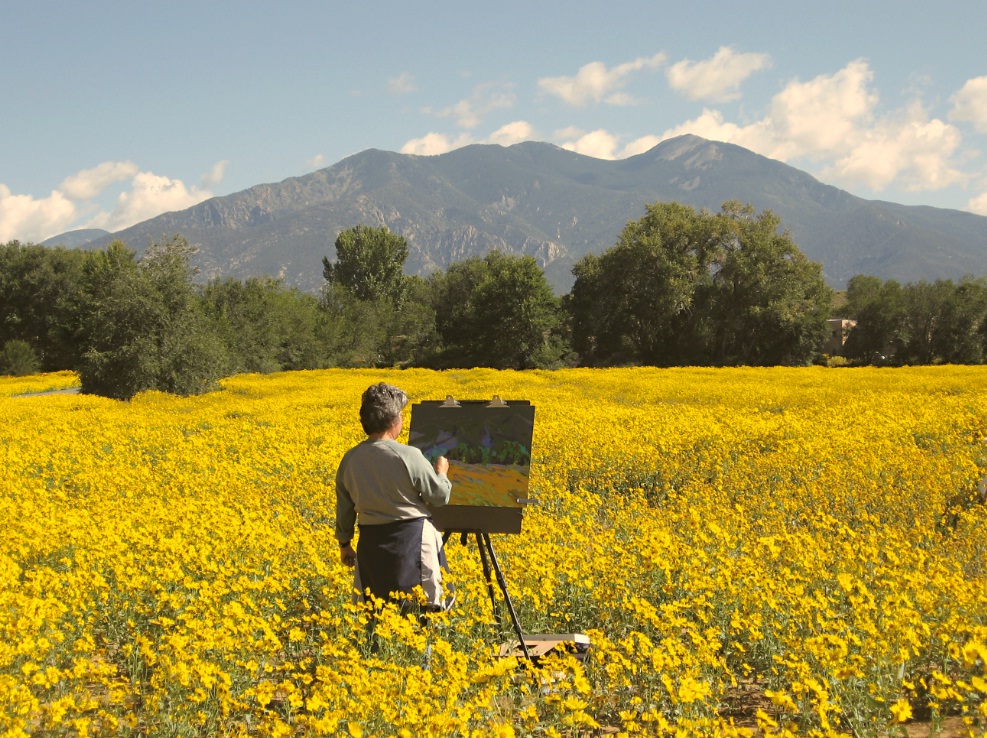 Artists share the heart and soul of four art communities. 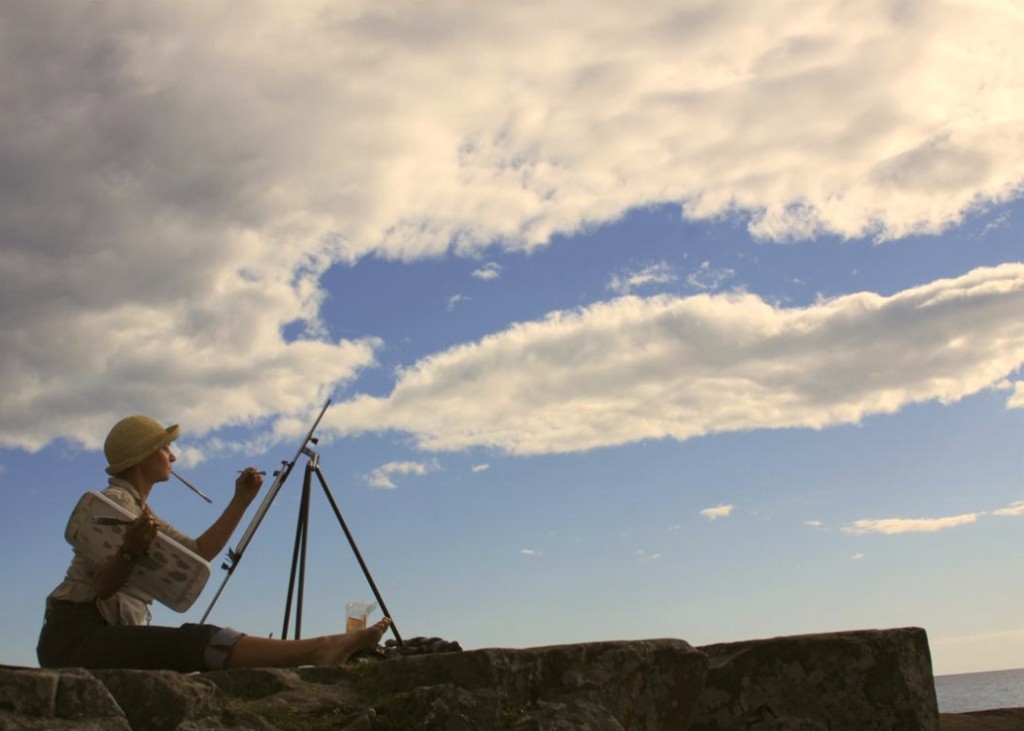 On a warm spring afternoon, artists gather in the Rocky Neck Cultural Center for a group critique led by Barbara Moody, an artist visiting the colony. The center’s current exhibition, “Clothing Optional,” lines the walls of the former church.

“How does this image engage the viewer?” Moody asks the artists, motioning to the first painting up for critique. “What is your emotional response?”

The scent of lilac and ocean air wafts through the open doors as the voices rise, a communion of artists.

Throughout the country, art colonies such as Rocky Neck, on the harbor in Gloucester, Mass., give artists the tools they need to create, sell and hone their craft and to network with other artists.

“Artists inspire artists,” says Deborah McLean, a silversmith and director of the Taos Center for the Arts. “Artists also teach other artists. There’s a real synergy around people of like minds to explore and develop.”

These colonies are havens where artists live—communal environments of solitude and concentration. Here, artists escape everyday distractions and focus on their work, and the power in numbers that art colonies provide has transformed many communities both culturally and economically.

For Kathy Gerdon Archer, artist and owner of White Bird Gallery in Gloucester, involvement with the Rocky Neck Art Colony gave her the exposure and community she needed to succeed as a photographer.

Amy Demmer, director of the Grand Marais Art Colony in Grand Marias, Minn., believes that colonies are not only beneficial to the artists but also essential to the communities. 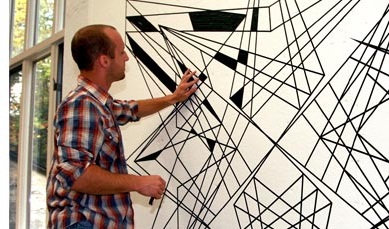 Nestled in a forest near New Hampshire’s Monadnock mountain region, The MacDowell Colony has been a cornerstone for artists since its founding in 1907. The space offers 32 private studios for artists of all disciplines, providing visual artists, writers, composers, and filmmakers with as much as eight weeks of residency funded by the organization.

Julia Jacquette, a member of the MacDowell board of directors, says that MacDowell’s location, “removed from the hubbub of a major city, [gives artists] serious uninterrupted work time.”

Jacquette has been involved with the art colony for nearly 20 years, beginning with her first residency as a visual artist in 1995.

“[Membership in The MacDowell Colony] allows me to enter my artwork in a deeper way,” she says. “I can think more clearly, more deeply about it because I’m not interrupted. I can build momentum in the studio.”

MacDowell offers artists the flexibility to establish their own working schedules in a space with minimal distractions. In addition to providing hot breakfasts and dinners, MacDowell’s staff leaves picnic lunches outside the artists’ studios, and Internet and phone access is limited to the colony’s main buildings.

The steady flow of new artists provides the colony with an organic chemistry and opportunities to forge new artistic relationships. Previous artists include Benny Andrews and Janet Fish, and many of MacDowell’s artists go on to notable exhibitions following their stays. Jacquette has exhibited her works at galleries throughout the world, including Amsterdam’s 1K Projectspace and New York’s Museum of Modern Art.

For Jacquette, art colonies such as MacDowell are “enormously helpful and invigorating, … [and they provide] an atmosphere where you’re buoyed by the presence of other artists.” 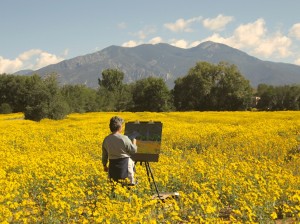 With a population of fewer than 6,000, the open-air town of Taos, N.M., is home to several art groups and more than 80 privately owned galleries.

“If you walk down the street in Taos and ask someone what they do, they’ll tell you they’re an artist,” says Deborah McLean, director of the Taos Center for the Arts (TCA).

“The light here is different [from] anywhere I’ve experienced,” says McLean. “That light … helps you to see differently, to see color and shapes differently. The comfort of the light allows you to relax and discover.”

TCA board member Janet Webb says that many residents believe the space has a “spiritual, mystical pull” and that the tricultural community provides “intercommunication and acceptance.”

“It just draws you here,” says McLean, who relocated to Taos from Nova Scotia. “You begin looking at the land and realize it feels very comfortable, and it’s beautiful, and it’s home.”

The town has harbored many successful artists, including Guggenheim fellow Larry Bell; abstract expressionist Agnes Martin; and founding member Bert Geer Phillips, who established Taos as an art destination more than a century ago.

The myriad art groups provide frequent programs and opportunities for artists to exhibit their work and build a collaborative, open environment. McLean says that the community is both rural and urban, which allows space for artists to grow in their work. 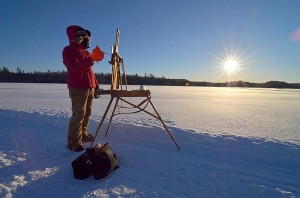 Grand Marais, an art colony tucked between Lake Superior and the Boundary Waters, along the U.S.-Canadian border, opens its doors to both novice and professional artists.

“The need to express oneself is what makes us human,” says colony director Amy Demmer. “It’s really important to us to nurture that expressionism in all people, all skill levels, all ages.”

The rural town emphasizes outdoor recreation and encourages visiting and resident artists to tap into their creativity through the environment.

Painter Neil Sherman relocated to Grand Marais after participating in its annual plein air competition. Now a member of the board of directors, Sherman says that the colony’s environment has a profound effect on his work.

“The scenes are always changing, always different, and I feel like sometimes I’m painting scenes that may never be seen again,” says Sherman.

According to Sherman, the diverse artists and residents of Grand Marais keep his creativity fresh and vibrant.

A sanctuary for the creative mind, the colony’s main building is a converted mission church. Demmer says the building provides a sense of spirituality that allows artists to “delve into their soul and have very powerful, transformative experiences.”

Founding artist Birney Quick opened the colony as a summer painting school in 1947. The colony transformed the surrounding town, and today it provides almost daily workshops and business classes for artists, as well as studio space with professional equipment and events for the community.

The colony’s work is interwoven into the town, which Demmer describes as friendly and inclusive.

“It’s about that homemade life, connecting your hands and your heart to the things that you’re doing,” she says. “That’s a really powerful creative tool for artists, too.” 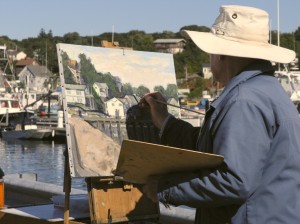 Galleries clustered along the harbor of Rocky Neck welcome more than 13,000 visitors each summer. With a history that spans more than a century, the art colony has hosted countless artists, exhibits, workshops, residencies, and cultural events.

“It’s funky and fun and a little bit off-color, but there’s something deeper than that,” says Karen Ristuben, eco-artist and president of the colony. “The people who are connected here know deep down that, despite differences between artists and nonartists, there’s a commonality that is really special.”

For many of Rocky Neck’s artists, including Ristuben, the exceptional light in Gloucester inspires creation.

“The atmospherics are beautiful,” says Ristuben. “I don’t know what it is, but you look over Gloucester harbor at sunset, and the reflected light … glows.”

Ristuben describes Rocky Neck as vibrant and inclusive. The scope of artists in a single location lends itself to collaboration and synergy, rather than competition, improving both the cultural economy and the personal success of the artists.

“Individual artists don’t always have the means or the wherewithal to promote themselves,” says Ristuben. “The artists who inhabit those spaces and work in those spaces learn so much from each other. It’s so important for artists to be in the same airspace with other artists.”