Steve Matson's 'Day at the Bea.. 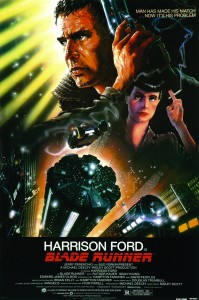 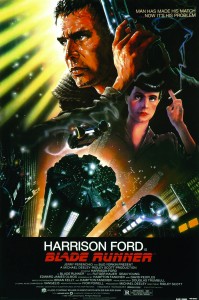 Yesterday I had a nice chat with a friend—for 3 hours. It’s beyond fortunate that this chat took place in his living room with both of us in close proximity, otherwise our phone bills this month could have been measured in mortgage payments or, as we would have measured them, in loss of expendable one-sheet and screen print allowances. We aren’t particularly close and have only met on a handful of occasions, so the context of our conversation wasn’t centered around catching up on family events or hashing out political opinions. No, Tal and I were talking about movie poster art, and he was taking me through a tour of his collection of some hundreds of one-sheets, two-sheets, four-sheets, and lobby cards. I was elated.

Movie Art—Stepping into the Spotlight
Over the course of the past year I’ve had many such conversations with collectors, framers, artists and gallery owners as I’ve been traveling across North America filming a documentary feature on movie poster art. I’m a purveyor and collector of such art myself, but to say that my goal in creating this particular film is strictly one of passion would be disingenuous—it’s also, of course, business. A large part of being a film producer is being able to eye the right time to produce content targeted toward a particular market, and for movie poster art and collectorship, now is that time.

I’m of the generation that is currently making the leap forward from early adulthood into family-hood, fatherhood, motherhood, or settling-down-hood, if you’ll allow me some inventive linguistics. We’re breaching our 30s, getting married, starting families, purchasing homes, and moving into careers that afford us the exposable income we’ve only ever witnessed second-hand through our own parents, growing up. We’re a generation raised on the popular culture of films, television, literature, and video games.

We’re Nerds and We Know It!
And, for better or worse, our decor overwhelmingly reflects this. These days it’s not uncommon to walk into a friend’s home and see a painting of Nintendo’s Mario over the mantle, or a stack of limited edition films from director Wes Anderson next to a vinyl LP collection. We’re nerds, we know it, and we take an immense amount of pride in it.

For my part, film has always been my chosen nerd passion. I remember falling in love with movies at a very early age. Not just the escapist magic happening on-screen, but the very act of visiting the cinema. This was in the ’80s, before the big box video stores and multiplexes turned the experience of movie watching into a commercial circus.

Iconic Scenes, Extraordinary Posters
During that time, movie lovers could walk into a local cinema brandished with painted murals of old movie stars in iconic scenes from their best films. We could visit the local video store and browse shelves full of films hand-picked by the owner of the store, rather than mandated by studio partners. And nearly every film was accompanied by an amazing cover illustration or painting.

I remember browsing through video stores before I was even able to read and being drawn to the dynamic, unique, illustrated VHS covers. Covers like “Back to the Future” painted by Drew Struzan, “Blade Runner” by artist John Alvin, “A Clockwork Orange” by Bill Gold, and “Jaws” by Roger Kastel. Mine was not an isolated experience; movie lovers everywhere were growing up this way. 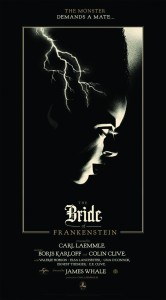 Hello Big Box, Goodbye Movie Art
But then, in the mid ’90’s something began to happen. The movie-lovers’ landscape changed. Local movie theatres were swallowed up by mega-cinema chains displaying studio partner-mandated blockbuster entertainment across 14 screens. Stunning painted murals were exchanged for paid advertisements. Gone were the traditional concession stands and in were the food courts and gourmet coffee shops. The experience of going to the movies became less like sharing a love of film and more like visiting the mall. Big box video rental stores crashed every city block, laying waste to the locally owned stores. Out were the friendly hellos and knowledgeable film recommendations, and in were the product placements and upsells.

These changes in the film-going experience extended far past the local level, as “cheaper, shinier, faster” eventually made its way to film marketing art as well. The incredible paintings and illustrations that used to be appreciated by studios and used for their one-sheet display posters, key art, and VHS/DVD covers were replaced with banal, generic, Photoshopped images almost overnight. Floating celebrity heads, the hero with his back to the camera, a romantic-comedy couple standing back-to-back, the badass walking away from an explosion… it was the same images recycled over and over again, passed from studio to studio; the product of market studies, test results, algorithms and celebrity agent demands.

And, although a few decent studio posters slipped through the cracks, the illustrated covers and posters that we knew and loved as movie fans all but died. But film poster art fans and movie lovers never forgot. They looked to the illustrated posters of the past for art, and these old one-sheets became more sought after than ever as the illustrated movie poster was becoming extinct.

In the blink of an eye, the company skyrocketed to popularity and lovers of illustrated film art, fueled by a sense of nostalgia and a longing for the return of the movie poster, rushed to support them. Over the past decade, the illustrated film screen print movement has snowballed. Companies like Nakatomi Inc, Poster Collective, Odd City Entertainment and Skuzzles have all joined the movie screen print game, with new companies following in their footsteps daily. Galleries 1988 and Hero Complex Gallery in Los Angeles, Bottleneck Gallery in New York, Spoke Art Gallery in San Francisco and more are all opening their doors to focus on illustrated movie posters for the leagues of fans and collectors who have come out of the woodwork.

eBay Blockbusters
Today, a limited edition screen-printed movie poster will sell out online in seconds, only to be flipped on eBay minutes later for no less than three times its original cost. The movement has inspired an entire generation of young, talented artists to begin creating film-inspired art in the hopes that they might one day have one of their works hanging alongside an original Ken Taylor, Jason Edmiston, or Aaron Horkey print in a collector’s home. The overnight, multi-million-dollar film art industry shows no sign of slowing and has been covered by such notable media as The New York Times, Entertainment Weekly, The Huffington Post, Empire Magazine, The Guardian UK and more. 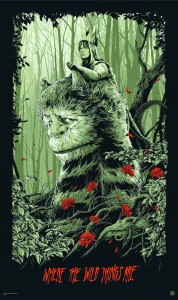 I have been collecting these posters for more than 5 years. Why is it, then, that I had never considered custom framing until I took on a role as Roma Moulding’s in-house video producer? It was not for lack of finances. Like many other collectors, I am more than happy to pay for beautiful frames to house my prized collections. Neither was it for lack of taste, as any framer knows that countless options are available to cater to any style. Why, then?

Framing—the Finishing Touch
It’s simply because I didn’t know that the option existed for me until I began working for a custom frame manufacturer. I had never walked past a frame shop and seen film art on display. I had never seen a framing ad targeted to my huge and rapidly growing collector’s demographic. If I had, I certainly would have spent the last five years spending money on custom framing (as opposed to just this past year). And there are leagues of others like me just waiting for the custom framing world to invite them in.

Give them a sign. A framed movie poster or screenprint on display in your shop’s window might read “Jaws,” but to a collector it says, “Nerds Welcome!” The movie poster is back. And it needs to be framed in something rad.